BY BUDD KOPMAN
February 4, 2008
Sign in to view read count 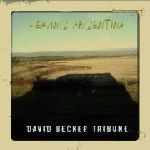 Leaving Argentina is an energetic and engrossing release from guitarist David Becker's group, The David Becker Tribune. Representing impressions of Spain, plus South America in general and Argentina in particular, this effort is a stylistic mix of Euroland (Cool Springs, 2005), a solo effort aimed at musical sound-painting, and Where's Henning? (Paras Recordings, 2004), a trio recording of standards and originals.

What Becker, his brother/drummer Bruce Becker and bassist Bolle Diekmann have aimed for here is to create tunes, rather than sonic landscapes, that evoke specific places and their reactions to them. The result is very successful in that the recorded sound and the emotions behind it make it easy to become involved. Stylistically, Becker's music resides under the label Contemporary Jazz by default in that it is not mainstream or, in this case, World Music, and is most definitely not Smooth Jazz.

The brothers Becker have been together a long time and Diekmann has been with them since 2003. The members of the trio clearly listen to each other, and the resulting sound, even when accounting for the guitar overdubs, is much bigger than would seem possible. Much of this sound must be attributed to how the drums and fretless bass interact behind the guitar.

The individual tracks vary widely in style. "Café Con Leche" is the most straight-ahead piece, and both Becker and Diekmann demonstrate good musical chops. The subsequent "It Takes Two" has the most overt connection to Argentina, with its tango rhythm and Dario Polonara's bandoneon accompaniment and solo adding color.

The rhythms and open harmonies evoke open spaces and the native land on "Patagonia," while "Racin' Through The Andes" is the hottest track as the whole group flies. Becker introduces "Cordoba" with a tender acoustic guitar introduction, "Mientras Duermes," after which Diekmann gets a chance to stretch out magnificently, getting a huge sound from his fretless bass.

The only non-original tune is Keith Jarrett's "Memories Of Tomorrow," originally the unnamed last track (aka "Part IIC" or :Part III") from The Köln Concert (ECM, 1975). Played with a melody-chord solo guitar introduction followed by the full band, this version demonstrates why the tune has such staying power.

The one ballad, "Hard To Say Goodbye," has a very attractive melody with some interesting harmonic twists in a standard ABA form. Becker performs a nice chordal introduction and then solos with taste and feeling.

Leaving Argentina is a delightful record featuring good compositions and fine playing all around.