BY NENAD GEORGIEVSKI
April 20, 2006
Sign in to view read count 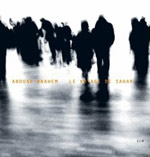 Many of ECM's standout albums are a result of rich confluences of jazz, classical and world music sensibilities. The authors of those albums have a thorough, deep knowledge and understanding of each tradition, and most of the time the intersections between the different traditions are blessed with good results.

Such is the case with Anouar Brahem. His music clearly dwells in different worlds, deeply rooted in Arabic music yet very open to influences from jazz and classical traditions, among others. Brahem is a master of the oud, the Arabian lute, and he is regarded as Tunisia's most innovative player on the instrument.

Just like his previous works, Voyage is a sublime and sensual fusion of jazz, North African/Middle Eastern traditional music and Western classical tradition. Brahem effortlessly combines these elements into an attractive blend that is uniquely his own. His music is heartbreakingly beautiful and shrouded in mystery. It evokes solitary peace and seems like a soundtrack for a voyage through Tunisian desert landscapes. But in a way it's also a journey through inner spaces, an aural trigger for introspection and meditation—the music offers a dark, impressionistic approach, with quiet lyrical passages slowly building in intensity.

Although this Voyage is peaceful and quiet, it brims with life. The recording consists mainly of Brahem compositions and new versions of his older compositions (such as "Vague/E la nave va, from Khomsa, and "Halfaouine, from Astrakan Cafe). The music is fluid and intimate, and the narrative centres around Brahem's effortlessly evocative sound on the oud, eventually finding companionship with François Couturier's solitary piano and Jean-Louis Matinier's mournful, intoxicating accordion.

Both musicians played on Brahem's 2002 masterpiece and milestone record, Le Pas Du Chat Noir. Here they make unusually lyrical, impressionistic contributions that advance the mood and the overall themes. In general, Brahem constructs his compositions with painter-like layering of colours and gradual shifts in texture, showing that he is interested in building a composite whole rather than creating a vehicle for soloing. But the overall sound and the way these instruments resonate into infinity are the most impressesive aspects of this effort.

There's pure wonder and revelation in this music. Brahem has followed his impulses and laid his soul bare, creating another modern masterpiece. Le Voyage Du Sahar should have special appeal to fans of jazz, classical and world music—or just plain good music.