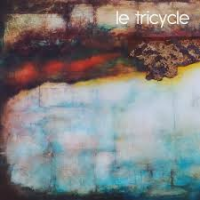 Like Matthew Halsall and the UK's Gondwana records, Momentanea from Strasbourg across La Manche are developing the bop template of the 1960s for a new younger audience. Whereas Halsall primarily looks to the spiritual jazz of that period, the core trio of Le Tricycle builds on the bop fundamentals from the eclectic musical palettes of its three core contributors.

In jazz terms Le Tricycle are young musicians who bring an enjoyable collective ethos, verve and brio to the varied compositions showcased here. Pianist Jean René Mourot may be familiar to some readers from his solo piano EP released at the tail end of 2012, but in truth this is very much a band improvisational setting in which all of the pieces are shared compositions. This allows other influences to permeate into the jazz structure—so for example bassist Adam Lanfrey can also be found as guitarist and vocalist in his own garage rock power trio 'Adam and the Madams,' where he is joined by drummer Arthur VONFELT. Vonfelt himself also contributes guitar to the Fatback meets P-Funk setting of the 'Fat Badgers,' while Mourot's current engagements also include playing accordion in a street band. Such is the life of the working musician in these austere times.

One of this albums main strengths is the way that the band make these varied influences work for them—building a juxtaposition of unexpected elements that leaves the listener not entirely sure of what will come next, yet still making for a memorable listen. Take for example Lanfrey's snaking guitar riff on "Prelude," that would sit well on Talk Talk's Spirit of Eden as it builds to its crackling climax, or the way that Mourot suddenly increases the tempo on "La Couer des Miracles," or even the circular piano riff that lifts "Achalandage no.7" skywards. These quicksilver changes somehow always feel in keeping with the music itself, never falling into the trap of shifts in time signatures for their own sake.

Other highlights include the way that Mourot and guest tenor sax player Alizon duel on "La Couer des Miracles" or later combine on "Schnitzel O'Clock." Perhaps pride of place, though, should go to Mourot's excellent solo on "Angry Men's Blues" that takes the music to unexpected places from opening statements reminiscent of say Dolphy's Out To Lunch to a place further and further from the starting point. It is not all 'sturm und drang' fireworks either—Le Tricycle show great versatility in producing a convincing ECM calm on "Kyrieuse" and a genuine moment of tenderness on "Denise" too.

It is this blend of the old, the new, the melodic and the 'out' that makes the collection so appealing. While not generally as muscular, there is a conceptual similarity to the way that someone like Henri Texier binds jazz innovation into warm, inclusive and melodic music. The hope must be that this heralds good things for both Le Tricycle and the Momentanea label who have shown an attention to detail, from the abstract sleeve to the quality of the production, that suggests clear creative values. I understand that more releases are planned this year and on this evidence they should be well worth keeping an ear open for.