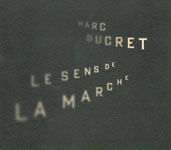 From the word go, guitarist Marc Ducret's Le sens de la marche enters another world, an unsettled one full of surprise and anguish—one for which there can be no preparation. Vaguely reminiscent of Frank Zappa, King Crimson and Tim Berne, it's a musical hubbub of organized chaos—systematic in theory but brutal and brilliant in practice.

The references, however, are many and various. Ducret's jungle is wild and urbane; on "Tapage," the distant echoes of Duke Ellington's jungle can be heard, revisited here in a modern megalopolis. Meticulously well-constructed, Ducret's music is a welter of kaleidoscopic ideas. Protean, it never follows straight lines, but rather loses itself in twists and turns, some soft, some brutal, wallowing in the art of breaking with tradition, with no holds barred. It is both powerful and violent, at times shocking and creating a dialogue with the both imagination and gut instincts.

Ducret's no-man's land is shady, reviving the senses, demanding attention and provoking surprise and expectation on "Aquatique." His constantly fluid, powerful writing creates U-turns, while managing to captivate from start to finish. This is also true of the 26-minute closer, "Nouvelles nouvelles du front,"("New News From the Front"), recalling News From the Front (Winter & Winter, 2004). On Le sens de la marche, however, Ducret is not the same man but remains faithful to his musical aesthetic; his music is not so much about playing but, through his tortured guitar and the fusion of energy, is a path that he has to beat out in order to echo the musicians he evokes.

He's also a great orchestrator who shares but never hogs the stage. There is a collaborative force in this music, recorded in November 2007 at the Avignon's Delerium—a grandiose, timeless baroque venue for the performing arts in the Cite des Papes, and an ideal setting for this rich, highly-charged music. It was there that he brought together a bevy of new musicians to support the old guard in the rhythm section—bassist Bruno Chevillon and drummer Eric Echampard, who together form a kind of National Youth Orchestra (if only the guitarist had been half-interested in that).

With a remarkable sense of the collective, everyone in the group puts in their penny's worth, be it the magic dust of Antonin Rayon's crazy keyboards (who also plays with Alexandra Grimal); saxophonist Mathieu Metzger, who can also be heard on reedist Louis Sclavis' Lost on the Way (ECM, 2009) and adds razor-sharp wildness to the mix; or Yann Lecollaire, with his inspired clarinet breaks. Every musician contributes to this tangled web, each playing a part in its formidably complex structure.

Entering this musical universe as if going into a labyrinth, would be easy to get lost were it not for the fact that Ducret guides, with brio, down the right path. But rather than looking for the way out, Le sens de la marche encourages remaining lost in it a good while longer.