BY DOUG COLLETTE
October 2, 2010
Sign in to view read count 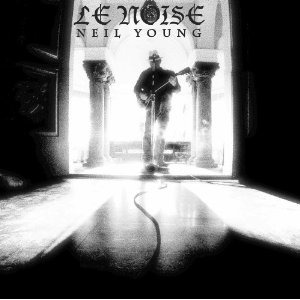 On Le Noise, Neil Young collaborates with famed producer Daniel Lanois (Peter Gabriel, Bob Dylan, U2) and it's a fascinating experiment to be sure. Yet, to whatever extent this pair of like-minded Canadians are successful,they have outwitted themselves in an all too-obvious attempt (as with the play on words of the title) to present the artist as a lone voice trying to communicate amidst the noisy interference of contemporary culture. Given Young's credibility, they overstate the obvious.

Even with Lanois' instrumental and production accompaniment in his own Silver Lake studio, this album nevertheless has a certain purity: it's Neil Young solo. Still, except for "Love and War" and especially the haunting "Peaceful Valley Boulevard," this isn't the bittersweet sound of Young's vocal vulnerability coupled with a lonesome acoustic guitar or grand piano.

On the contrary, the majority of the eight tracks resemble the opener "Walk with Me," for all intents and purposes an invitation to the listener into the album (and in a larger sense, in its mention of unconditional love, an open letter to his most faithful fans). Coarse electric rhythm guitar eventually gives way to snippets of conversation (annoyingly cropping up at various intervals throughout Le Noise) surrounded by shards of those guitars echoing back and forth in the bottomless sonic depth Daniel Lanois creates.

Then it's inexplicably over, beginning again on the same note, lyrically and instrumentally, with "Sign of Love." Eerily reminiscent of Young's hard rock past as much of Prairie Wind (Reprise, 2005) recalled his Harvest (Reprise, 1972) period, this is the point where the absence of a rhythm section becomes a liability, though there's no disguising the strength behind the hard chording. And, as Young's deceptively fragile voice gets the Lanois treatment, thoughts of the wilfully perverse Trans (Geffen, 1983) phase come to mind as well.

Thus, Le Noise becomes a work to be admired more than taken to heart. The lyrical themes of love for family, friends and the environment generate some interesting lines ("somewhere in the ray of sunshine you find the dark"), but there are not enough such flashes to generate a cumulative impact. The contrast between "Angry World" and "Rumblin''" with the aforementioned "Love and War" couldn't be more stark: on this cut, there's a clarity of thought equal to the sound of the wooden guitar that reveals Neil Young's heart in a way that has always been uniquely his; the words, the music and the performance combine to resonate quietly but ever so deeply.

It's hard not to wish for more tracks like that, just as much as it's difficult to resist longing for bass and drums on the loud cuts of Le Noise. Accordingly, listeners who dote on song structure and arrangements that mirror that convention will find this cd wanting except for those rare moments such as the patently autobiographical "Hitchiker" where Neil Young lets his guard down to let flow what comes naturally to mind and Daniel Lanois' technological presence doesn't intrude.