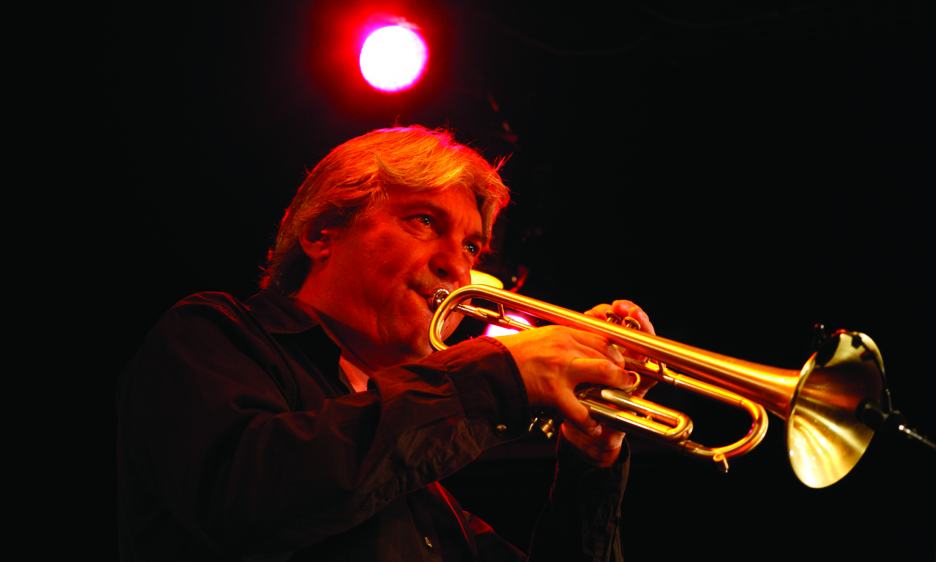 Now in its 26th edition Hong Kong's annual celebration of all things Francophone, Le French May, today spills well beyond the temporal restrictions implied in its twee title—with many of the festival's 100-plus cultural happenings littered across June. Among them in 2018 was the extended Live Jazz Series, a three-night affair hosted in the formal confines of Hong Kong City Hall's Theatre, over the weekend June 7-9.

Typical of such state-backed affairs, a conceptual conceit was required: Merely presenting leading contemporary French jazz musicians—of which there are of course many shiny examples—might not prove suitably ambassadorial, nor quite bombastically Franco-friendly enough. So instead we had fringey contemporary French musicians playing tribute to towering French icons of divergent genres: namely, Jean-Christophe Cholet and Alban Darche co-leading an orchestral suite dedicated to classical composer Francis Poulenc, while Eric Le Lann dedicated an evening to retreading the genius of classic "chanteurs" Édith Piaf and Charles Trenet.

The ambitious centerpiece saw Cholet and Darche lead an 11-piece chamber outfit through a program based on this year's Le Tombeau de Poulenc —literally a tomb to the early 20th century composer, best known as a member of the reactionist Parisian collective Les Six. Taking Ravel's solo piano cycle "Le Tombeau de Couperin" as their cue, it is a brave and boggling undertaking. Indeed, while billed as a "Jazz Tribute to Francis Poulenc," this dense, knotty, and largely composed suite at times crosses close to contemporary classical territory, marked by frenetic rhythmic patterns and spiraling, intersecting horn lines.

At its core, literally and figuratively, rests the optical illusion of two cuddling grand pianos, played by jazz-schooled co-composer Cholet and classically inclined Nathalie Darche, whose contrasting and complimentary melodic patterns intersect with mathematical precision. To their right is a three-piece brass section, with bass and drums out back, while woodwind and violin flank stage left—among them stands co-composer and saxophonist Alban Darche, who waves his free hand in the guise of an aspiring conductor. Directing the players between breakneck tempos and dreamy, languid spells, colored with radiant harmonies and soft-focus textures, it's often gripping stuff—but there's not a lot of space left for improvisation. Just a few tightly scripted sections, normally built upon a simple vamp, are set aside to showcase one player per tune—trumpeter Olivier Laisney lent a particularly compelling turn to Cholet's set opener "1st Convergence," exercising an economical elucidation reminiscent of Terence Blanchard's soundtrack work.

Cholet has demonstrated a penchant for such conceptual projects and a flair for playing over large orchestral ensembles with his previous recordings as leader; Caractères (2012), a weighty, self-penned long-form orchestral suite and Nights in Tunisia (2013), a compelling world-fusion collection flirting with Arabic instruments and influences. While he and Darche's jazz-ish compositions find a common thematic form, pieces from a third voice—Vienna Art Orchestra founder Mathias Rüegg—are strictly classical, demanding intellectual workouts for two or three players. Collectively, there might be legitimate worries that the trio have bitten off an almighty beast's carcass without adequate time to masticate, but it's clear here the work is worthy of a wider audience from both the jazz and classical communities.

"Sorry, but Charles Trenet is not here," began Le Lann a night later, one tune into the clumsily titled final concert "Revisiting Piaf and Trenet's Biggest Hits," perhaps a sly recognition that the vintage crooner—whose fame was established in the 1940s and died in 2001—might be an unknown quantity to this international crowd (no such problems with Piaf, largely thanks to Marion Cotillard's Hollywood portrayal). Not that it mattered un jot: Le Lann's sharp and intuitive acoustic quartet remodeled and refit their material with ease and elegance. Trenet's "La Mer" was recast as a breezy bop number, while a Latin lilt was leant to "Que Reste-t-il de Nos Amours?," a tune successfully jazz-ified by talents as diverse as Stacey Kent and Paolo Fresu. Piaf's "Hymne A L'amour" was fleetingly, flourishingly invoked as a soporific ballad, while "La Vie en Rose" served as another exercise in group swing on the unsteady waters of non-jazz charts.

While supposedly inspired by the big band arrangements of 1990's Éric Le Lann joue Piaf Trenet LP, the dusted-off songbook proved surprisingly supple in this stripped-back n' straight-up setting. Yet things cooked hottest when the program was abandoned altogether, the quartet stretching out regally over the modal improvisational vehicle of "Milestones"—bassist Sylvain Romano rumbling thunderously in the ocean depths while drummer Donald Kontomanou dropped gleeful depth charges of rhythmic punctuation into the murk.

Throughout, Le Lann proved a sophisticated yet unshowy soloist, preferring melodic continuity over cheap thrills and trills. With a sweet, sugary tone in the mid-register and a breathy brooding, approach to the ballads, there's a sense that at 60 years old, Le Lann's horn has heard it all. By contrast, at nearly half the leader's age, pianist Paul Lay is an unashamed showman—hammering cross-handedly, rocking recklessly on his stool and raising limbs above his head before crashing down another thundercrack chord—but there's a deep melodic flair beneath these pyrotechnics. Whether blitzing up and down the keys in dazzling spidery runs, or tenaciously repeating an offbeat melodic fragment, a thoughtful sensitivity underpinned the 33-year-old's playing.

The spotlight briefly shifted across the Atlantic on the opening evening, when Cholet was called on again to present a program oxymoronically entitled "Jazz Greatest Hits"—perhaps the karmic/contractual cost of premiering the Poulenc regionally?—alongside his gigging quartet of Darche and the same rhythm section. Opening with a stilted "Take the A Train," the 75-minute set had a stifled back-to-school feel, the quiet lethargy of a racing car driver being asked to retake his driving license.

Gradually the musicians relaxed into their roles, with Darche stretching out over a gorgeous "Body and Soul," eeking a husky tone from the lower register of his alto sax, bluesily slurring notes with an equal share of invention and indolence. While this time playing sideman, the reedsman roundly stole the spotlight from his bandleader, who seemed quite content with the arrangement. Playing with the uncluttered air of a diligent technician, Cholet comps in sharp, staccato chord stabs, and is an equally economic soloist—his precise, studied lead runs never feel remotely close to either careening out of control, or raising pulses beyond resting. Almost invariably, improvisations fizzle out into a lazy round of big block chords and turnarounds.

Thankfully, it swung—countering by the workmanlike feel of bassist Stéphane Kerecki was drummer Christopher Lavergne, who all-but saved the enterprise with verve and goodwill alone. Flitting between brushes, sticks—and in the case of rousing closer "St. Thomas," his bare hands—Lavergne absentmindedly implored his kit with the loving disdain of a child he is disappointedly telling off. Of course, ending on Sonny Rollins' American standard would have chimed all wrong in these climes, so the quartet returned to the stage for an uneventful run through the most quintessentially French jazz tune of all—you guessed it, "Autumn Leaves."