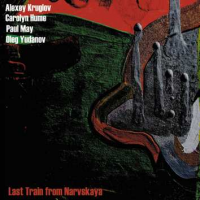 In 2019, the UK-based Leo Records was celebrating the fortieth anniversary of its formation by the Russian émigré Leo Feigin, the self-styled "enthusiastic amateur" who managed to attract a host of first-rate musicians to the label, as well as developing many who were little-known when they joined Leo. An important part of the celebrations was the 8th Leo Records Festival, held in St. Petersburg in October, an event which had become almost annual. As Leo has had a cosmopolitan roster ever since its inception, it seems fitting that Last Train from Naryskaya, recorded during the festival, features a quartet combining Russian and UK players. The Russians, saxophonist Alexey Kruglov and percussionist Oleg Yudanov, are well-established Leo labelmates, having first recorded together in 2007, for Kruglov's Leo debut, Seal of Time. The Brits, pianist Carolyn Hume and drummer Paul May, are a long-standing duo who have recorded for Leo since 2000, and together form half of the group Fourth Page.

Across five tracks, totalling one hour, the quartet freely improvised a variety of soundscapes, beginning tentatively with the quietly economical "Winter Aviary" on which the players are restrained, getting the measure of one another and their ensemble sound; the track contains a fascinating passage in which the drummers, May and Yudanov, probe and respond to one another, negotiating a restrained sound which works for both of them and the ensemble as a whole.

Next up is "Red Wave Suite" which, at nearly twenty-two minutes, is the album's longest track and centerpiece. Kruglov's sax dominates, playing slightly too loudly at first, but soon getting it just right, so his bandmates' contributions can be clearly heard; after firing off a series of staccato phrases, he builds upon and varies their patterns, creating an impressive solo, one which demonstrates why, in the past, he has been labelled "a genius" and "the future of jazz." After a brief low-key passage featuring percussion, Kruglov builds another, more abstract solo which becomes a dialogue, percussion and sax complementing each other, and Hume's piano chords underpinning everything well; altogether, a most impressive group improvisation.

At seven minutes, the album's title piece is relaxed and reflective with mellow, melodic sax playing prolonged notes, perfectly framed by percussion and piano. The sixteen-minute "The Lover-Magician" opens with a similarly tranquil melody from Kruglov, but then he fires off a totally contrasting barrage of free screaming noise before returning to the tranquility; the effect is similar to someone scribbling across a watercolour landscape. The piece proceeds with a series of contrasting episodes involving all four players, some mellow, others less so, but no more of the graffiti, mercifully. With its enigmatic title and episodic structure, the track could almost be incidental music for a drama. Just as theatrical, the closer "Voices of the Luna" features some dramatic, guttural recitation and vocals from Kruglov, making it an intriguing end to an enthralling album.