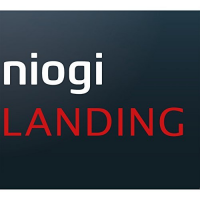 Israeli group Niogi describes themselves as an "instrumental band," leaving the question of musical genre open. But their sound is firmly placed in the ECM contemporary jazz world: "Jan's Balloon" opens with a sound like whistling from Omri Abramov's EWI (electronic wind instrument), playing a tuneful theme reminiscent of the Americana of the Pat Metheny Group. On the other hand, "Mercury Enters Virgo" strongly recalls the classic British progressive rock group Genesis to me, even though I can't place the specific song. No doubt the creative use of synthesizers here is partly responsible. It's one of the most striking aspects of the sound: clearly neither Abramov nor keyboardist Guy Shkolnik are employing stock patches, instead crafting sounds tailored for the music at hand.

Acoustic sounds definitely also have a strong role in the mix. Abramov's tenor and soprano saxophones are prominent—tenor takes the lead role in "Jan's Balloon" after the EWI states the theme, for example. Shkolnik's piano is the foundation instrument throughout, and renowned Norwegian bassist Per Mathisen plays both acoustic and electric basses, providing a solid foundation.

Legendary engineer Jan Erik Kongshaug and Oslo's storied Rainbow Studio play a part as well. It was Kongshaug's idea to record the five pieces in Shkolnik's "Images" as a suite, providing a grand, picturesque conclusion to the album—a journey of some 24 minutes, by far the longest track. Core members Shkolnik and Abramov have provided a truly memorable set of tunes—the kind that almost immediately sound familiar, as if you had heard them before—as well as being responsible for the arrangements. Another release that would have received more attention if it had "ECM" on the cover, and recommended to fans of that sound.