By Bruce Lindsay
November 6, 2013
Sign in to view read count 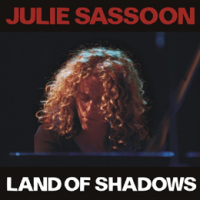 Land Of Shadows, the second album from British pianist Julie Sassoon, is a striking work. A mix of the simple and complex, gentle and strident, dark and light, it's powerful and affecting.

After studying in the UK Sassoon moved to Germany in 2009. Recorded live in Cologne, Dessau and the Neue Synagoge Berlin during April 2012, this music explores Sassoon's German-Jewish roots. Clearly, this exploration is an extremely personal one but Sassoon's music has a universality that invites everyone to enter and share in experiencing her often quite remarkable compositions. A DVD accompanies the album, giving an insight into the pianist's intensely focussed performance style.

The first impression given by Land Of Shadows is one of a controlled, delicate, musicianship. "Just So" has a sparse, restrained, beauty that Sassoon maintains throughout its length—an approach that creates a hypnotic appeal as well as some ultimately unresolved tension.

Sassoon returns to this delicacy on more than one occasion—the opening of "Forty-Four" is a particularly beautiful example from what is the album's loveliest tune—but there are other sides to the emotions revealed on Land Of Shadows. "What The Church Bells Saw (Part 2)" begins with a simple and repetitive three note pattern but an expectation of further restraint is soon confronted with a more aggressive approach from Sassoon. She adds counter rhythms, building the tension more rapidly than before, then resolving it for just a short time before building it up again—ultimately, to an almost unbearable level. There's a genuine sense of storytelling about this composition, a feeling of a drama unfolding before the eyes of those bells. But exactly what that drama is remains a mystery to the final note.

"Forty-Four" offers the first appearance of Sassoon's voice. Her wordless vocal has an ethereal quality, floating over the notes of the piano and adding a fresh layer of harmony. It sounds spontaneous, emerging from her response to the music. While the spontaneous vocals which arise from some pianists detract from their music, even overwhelm it, Sassoon's voice gives it more breadth, a greater dynamic and—on "Land Of Shadows"—a sense of disquiet. A beautiful if at times unsettling instrument.

"New Life" closes the album. At almost 20 minutes in length, it's an impressive performance in its scope and inventiveness—composed when she was pregnant with her daughter. Indeed, Land Of Shadows is an impressive album from start to finish.