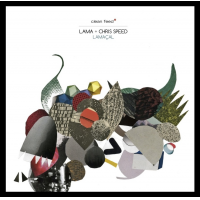 Lama is a young Portuguese/Canadian trio with a firm foothold in both Rotterdam and Porto. Lama is trumpeter Susana Santos Silva, double bassist Gonçalo Almeida and drummer Greg Smith. Lamaçal, Lama's second album on Clean Feed, was recorded live during the Portalegre Jazz Fest in 2012, and features well known clarinetist/saxophonist Chris Speed as a guest. Santos Silva, Almeida and Smith are remarkable musical characters who have something to tell and who have also succeeded in establishing a strong group identity. The trio has at its disposal a wide range of techniques and approaches well absorbed from the jazz tradition, all of which are exploited creatively in service of their imaginations. As on their first album Oneiros (2011), they created a fascinating sound- universe all their own. The collaboration with Speed is just a natural consequence of this.

Whether it be an Ornette Coleman-informed piece such as "Pair Of Dice" or the funeral march atmosphere of "Manta"; the continued rolling generated from the title piece or the whale song of "Moby Dick"; the beautiful melody of the Bolero-like repetitive bass motif of "Anemona" or the handsome hand-drumming of "Cachalote" (sperm whale)—all are impressive and convincing as a colorful oceanic whole. The sea-as-habitat plays a prominent role throughout, and the spirit of Coleman permeates all the pieces. It is most apparent in "Pair Of Dice," which inherits the qualities of Coleman's "Una Muy Bonita," from 1960's Change Of The Century (Atlantic). Santos Silva's phrasing has something of Don Cherry's intrepid momentum. Her interplay with Speed is rich, sophisticated and full of productive tension.

It is the quality, especially of the transitions—between songs and within the compositions themselves—that makes the album special. An important part of it are the passages in which a single instrument deepens the piece, pushes forward into new areas, and opens up new horizons to continue, which constitutes a distinctive difference from classic jazz solos. At Lama's core is an engaging combination of roughness and melody, audacious and challenging line drawing, and a special unity of the pleasure of playing and deep concentration.

Santos Silva plays everything for which a trumpet is made. Almeida has a wonderfully vibrant bass sound and expands this in a special way by subtly infusing electronics. Smith, firm and flexible as well as rapidly reacting, has everything at hand and knows to use it aptly and at the right moment. Together, their playing remains amazingly grounded all throughout, while constantly new perspectives are being opened, urged, persevered, and shifted. Whatever happens, the excitement of listening continues. Ultimately the group manages what many others try most to achieve: creating appealing fantasy worlds that spark the imagination and could serve as salvation in the vast ocean of reality. The music evokes associations with Josef Nadj, Vasily Kandinsky, Manoel de Oliveira, and Robert Wilson, and there is a parallel appealing pictoral expression on the cover of the album—one of the nicest seen so far this year.

And then, to realize that this is all shaped out of mud. "Lama" means "mud" in Portuguese; guts and self-confidence are clearly required to take that as a starting point. The album title, Lamaçal, meaning "sludge" or ""silt," goes a step further still. Sea, tides, swell, sludge, creation; Santos Silva, Almeida, Smith and Speed delve into the remarkable, and mould it into fascinating, provocative shapes.