BY HRAYR ATTARIAN
July 5, 2018
Sign in to view read count 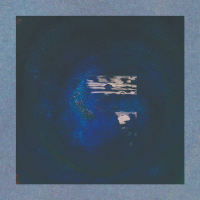 Bassist and composer William Parker is a tireless innovator whose entire oeuvre is filled with singular moments of brilliance and artistic exploration. However, Lake of Light: Compositions for AquaSonics is his boldest and most unique work to date.

A variation on Richard Waters' waterphone, the aquasonic consists of tone rods and contains a small amount of water. When the rods are percussed or bowed, it produces an eerie, haunting sound. Drummer Jackson Krall custom-built Parker's own version of the instrument, and Parker first showcased it on his 2017 composition "Healing Songs From The Tone World."

On the current album, Parker brings together drummer Leonid Galaganov and visual artists Anne Humanfeld and Jeff Schlanger to interpret seven of his originals written for four aquasonics. The result is a moving and abstract series of soundscapes that provoke, stir and captivate.

The passionate "Purple Heartbeat" opens with thudding and hypnotic refrains. The tune alternates between restless angst-filled melody and angry, martial rhythms. The riotous interplay among the quartet members is simultaneously stimulating and disquieting.

This energetic ensemble-performance reaches its acme on "Helium Butterfly." Angular beats and mesmerizing drones lead to a gripping and stormy cacophony that retains an earthy tenderness. The mechanical flutters and resonating strikes flow in thunderous cascades. The darkly-hued tonal circles conclude on a somber note.

Elsewhere, the energetic and effervescent "Action" allows the group to explore the full range of the waterphone. The musicians meld their dissonant, divergent stream-of-consciousness solos into a colorfully multifaceted, dynamic and emotive piece that seems to morph endlessly.

The title track is perhaps the most spiritual on the recording. Contemplative and serene, the collective aquasonic chant is like a Zen prayer. The individual undulating monologues rise like incense smoke and curl around one another, creating musical shapes of ethereal dimensions. The brighter, more urgent overlapping lines form a siren song of sorts, like the lovelorn ponderings of a mythical creature.

Parker's imagination and creative vision reach a new height with this sui generis release. Although it may not be for everyone, Lake of Light is both an intellectual and a soulful delight, guaranteed to satisfy open-minded listeners.