By JACK BOWERS
November 9, 2013
Sign in to view read count 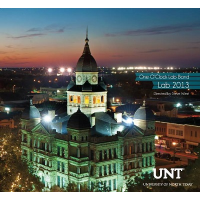 The University of North Texas is situated in Denton, a city of roughly 120,000 less than an hour's drive northwest from Dallas / Fort Worth. To students at UNT as well as its year-round residents, Denton is home, even if in the former case a home away from home. And speaking of home, the university is home to the country's oldest and most celebrated Jazz Studies program, anchored by the superlative One O'Clock Lab Band whose members are special and whose alumni comprise a who's who of top-rank professional jazz musicians. To honor their adopted home, the One O'Clock Band and director Steve Wiest have dedicated their annual Lab recording for 2013 to the city of Denton, performing compositions and arrangements designed to underscore the singular ambience and charm of what is known to them as "Jazz Town U.S.A."

Each of the songs was composed and / or arranged by students or faculty members, all of them with Denton in mind. Wiest wrote "Denton Standard Time," former director Neil Slater "Will or Would?," which he says is "a disguised variation of [his] home street address in Denton." Tenor saxophonist Aaron Hedenstrom furnished two songs, "Old West" and "Honeybee," complementing trumpeter Keith Karns' "Somewhere on the 33rd Parallel" and "The [town] Square" and trombonist Jenny Kellogg's graphic rush-hour "Traffic Jam." To reach Denton, one can apparently board Billy Strayhorn's venerable "A Train," whose buoyant ride from Harlem to deep in the heart of Texas has been carefully charted by faculty member Rich DeRosa. Rounding out the program is another standard, Herman Hupfeld's "As Time Goes By," whose tasteful arrangement by Drew Zaremba denotes Denton's transitory nature as a college town.

As this is the One O'Clock Band, the assumption is that awareness and musicianship will be exemplary, a theory that is borne out on every number. The ensemble is tight as a sailor's knot, the soloists generally diligent and resourceful. Hedenstrom solos neatly on "33rd Parallel" and (with tenor Nick Salvucci) on "Standard Time," Kellogg and Karns on "Parallel," alto Alex Fraile on "A Train," Salvucci and trumpeter Stuart Mack on "Will Or Would?," alto Devin Eddleman and trumpeter Preston Haining on "Traffic Jam." Pianist Addison Frei pleases twice, on "A Train" and "The Square." Baritone Spenser Liszt is handsomely showcased on "As Time Goes By," drummer Matt Young on "Honeybee." Young, Frei, guitarist Scott Neary and bassist Young Heo comprise an admirable rhythm section.

Analysis aside, all that needs to be known is that this is the One O'Clock Lab Band at its music-making best. Enough said.

Take the “A” Train; Old West; Somewhere on the 33rd Parallel; Denton Standard Time; As Time Goes By; Will or Would?; The Square; Honeybee; Traffic Jam.