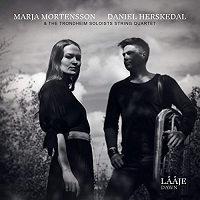 For her Norwegian Grammy-winning album Mojhtestasse (Vuelie, 2018), South Saami singer Marja Mortensson recruited tuba player Daniel Herskedal and drummer/percussionist Jakop Janssønn on a sublime offering of nature-inspired folk songs. On Lååje—Dawn , Mortensson and Herskedal reunite for their first duo outing, once again finding their muse in Norway's nature. But the seasonal invocations in Mortensson's poetic lyrics are tempered by ecological warnings. Dawn represents renewal and hope, but as Mortensson and climatologists the world over know, Earth is at the dawn of potentially irreversible change.

Laaje -Dawn, however, is neither an obvious concept album nor an overt political manifesto, for seven of the ten tunes are yoiks—chant-like vocalisations of the Saami people of Northern Europe. The three tunes with lyrics penned by Mortensson are sung in the South Saami language. Mortensson does some philosophical soul-searching on "Where Did I Come From," her esoteric, hauntingly beautiful voice buoyed by The Trondheim Soloists String Quartet. The harmonic weave of dual violins, viola and cello, enriched by Herskedal's tuba, grace seven of the album's ten tracks. Mortensson alternates mantra-like yoik with hushed vocals on "Piere Avla's Yoik," with strings toggling between balletic-like pizzicato and lush sustain.

Spectacular, the episodic "A Storm is Rising," which bears the hallmarks of Herskedal's forays into Middle Eastern music on The Roc (Edition Records, 2017) and Voyage (Edition Records, 2019). Pizzicato rhythm, softly lowing tuba and Mortensson's circling yoik gradually cede way to a more urgent tempo. A looped tuba riff gnaws away beneath Arabic flavored strings and tuba of foreboding gravitas. Mortensson's yoik returns, more urgent now, and a piercing violin motif repeats like some Medieval storm warning. In the final stretch, as though signalling the storm's weakening and eventual passing, tuba and yoik fall into harmony, pizzicato strings return, and lulling tuba and gentle yoik prevail.

Mortensson mines yoiking tradition with two yoiks from a 1911 recording by Kristina Johansson. Between Mortenson and Herskedal it is debateable who expends greater puff on "The Woodpecker" and "The Ptarmigan"—hypnotic duets of dizzyingly repetitive patterns. Mortensson's technical precision and stamina are particularly evident on these tunes, notably in her high-pitched vocalese on "The Ptarmigan." On the achingly lyrical title track, a ballad of hymnal qualities, Mortensson praises the rapture of each dawn. Pizzicato strings like a ticking clock underpin "Be Cautious," a warning on climate change and the finiteness of resources. Mortensson's mournful vocals are lent sympathetic support by solemn strings that conjure the orchestras of Egyptian singer Umm Kulthum.

The album finishes with a triptych of yoiks, lifted by Herskedal's elegant chamber arrangements. Layered tuba and bass trumpet, the harmonic fusion of tuba and yoik, and velveteen string textures, provide a magic carpet for Mortensson's singular flights.

More than a stunning musical collaboration, Lååje—Dawn serves as a potent reminder of the treasures at stake when minority languages and cultures face extinction. Mortensson is doing her bit to preserve the yoiking tradition. It will take a concerted global effort, however, to ensure the rapturous dawns of future generations.