By Phillip Woolever
January 2, 2020
Sign in to view read count 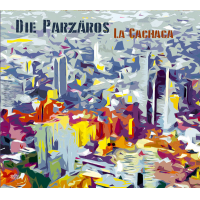 Die Parzäros is a Colombian trio currently based in Cologne after studying music in Germany. This album serves as a positive introduction to the band's Latin-based jazz-rock sound and, while the band is already noteworthy, indicates the likelihood of them reaching even higher levels in the future. The trio consists of guitarist and principal composer Juan-Pablo Gonzalez-Tobon, bassist Joan Chavez and drummer Luis-Javier Londono, who adds to the action with an untypical kit creating rapid-fire conga or tumba type percussion throughout. A zany aesthetic permeates for the duration but the album's primary traits are those of solid musicianship and songwriting.

While they primarily define themselves as jazz musicians, the group strives to incorporate Columbian folklore and traditional dance rhythms into a rock and roll attitude. The result is well over fifty madcap minutes of guitar-based instrumentals with many strong riffs. "El Cuarto" spotlights Gonzalez-Tobon's six-string skills, and "Madera Negra" touches on themes reminiscent of the interaction Carlos Santana and John McLaughlin shared on Love Devotion Surrender (Columbia 1973), including tasty, hand-drummed accents and electronic icing.

The traditional cumbia selection "Le Rebuscona" transfers Caribbean waves to the electric Rhineland quite effectively and there's plenty of light in "Tunel" (Tunnel) as the band hits pay dirt, strumming into explorations of reverberation with a harder edge. "Tanz der Kamele" and "Q'hubo Pues" are frantic speedballs driven by slick guitar shredding which conjures sounds that might emerge from a hollow-bodied ax packed with Blue Oyster Cult "stun" chords.

"Un Porrito para Noica" delivers multi-metered, mescal-worthy tonal toasts for any fiesta while Chavez percolates with precision on the bass, which is even more pronounced on "Kama de Shrekens," with intertwined flamenco patterns and righteous riffs by Ginzalez-Tobon. "Tosque" is a mischievous mix of samba sensibilities and hard-rock power chords—like Jan Zehrfeld's German jazz-metal band Panzerballett—over high jinks on the high hat.

This creative crew could be just one or two "Oye Como Va"-style, vocalized hooks away from making a substantial impact. A Spanish word for fun is "divertido." On this rollicking release, Die Parzäros also fit that description very well.