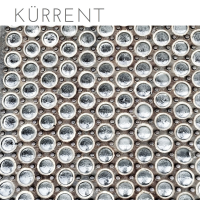 A mainstay of the New York scene since the '90s, organist Brian Charette has a worldly view on music that makes it hard to contain all his pent up musical energies in a conventional way. This partly explains why his recent spate of records for the Posi-Tone label seemed to satisfy while still leaving one with the nagging feeling that Charette has so much more to say then can be contained in the radio-friendly time limits set by the label.

This very fact makes his recent self-released set Kurrent the breakthrough offering that we have all been waiting for with baited breath. It's a diverse and disparate recital that manages to cover a whole lot of ground while still retaining a cohesive whole and identity. That is a task easier said than done and that makes this disc all the more satisfying.

The first three tracks alone cover quite a good deal of ground. "Doll Fin" is a definite groover that deceptively seems to be in an odd meter. "Time Changes" has a title that explains itself while striking a more conventional organ trio pose. With "Mano Y Mano," robot-like vocal riffs compete with a triplet heavy melody which itself stalks a backbeat groove, only to give way to Ben Monder's rocking metal licks. Elsewhere, Monder conjures up further mind-bending licks, sounding particularly incendiary on the rollicking "5th Base." At the other end of the spectrum, his fat-toned statements on "Conquistador" recall Jim Hall's with their logic and story-telling candor.

Charette seamlessly blends keyboard patches with his organ textures in a way that makes perfect sense and pushes the envelope in terms of what can be accomplished with such forward-thinking ideas. "The Shape of Green" is a great place to experience the mélange of styles. Starting out with guitar and organ counterpoint in a melody suggesting a Bach cantata, things quickly launch into the stratosphere with spacey resonances and more of Monder's spikey guitar. On the previously mentioned "Conquistador," Charette's solo includes the type of sign wave manipulations typical of early Moog synthesizers, while his Rhodes delivers an angular melody over a heavy backbeat.

Responsible for anchoring the grooves and navigating the ever-changing landscapes of Charette's originals, drummer Jordan Young has a formidable task to accomplish. Yet like Charette, his range of abilities is more impressively demonstrated here than on any other session he has been heard on to date. His drum fills are superb as he vamps on the closing riff of "Honeymoon Phase." On "Catfish Sandwich," the funky closer which sounds like Chitlin' Circuit fare on steroids, Young's assertive voice takes the piece to its apex with the drummer's ringing snare and open toms adding to the overall character of the piece.

While there seems to be a tendency these days for mainstream and experimental audiences to keep their distances from each other, Kurrent crosses the divide in a way that is sure to please both camps.