By JOHN KELMAN
September 8, 2013
Sign in to view read count 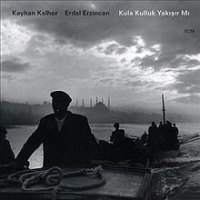 When Kayhan Kalhor and Erdal Erzincan released The Wind (ECM, 2004), it was often shockingly beautiful evidence that jazz doesn't own the concept of improvisation—already a millennial concept when jazz first emerged in recognizable form at the turn of the 20th century. There are academics who now assert that "America's classical music" actually dates farther back, its roots easily found in older cultures. Does that mean, then, that the music played by Kalhor—Iranian-born child prodigy and virtuoso of the kamencheh (spike fiddle), steeped in his country's tradition but also studying western classical music in Canada and a collaborator with cellist Yo-Yo Ma in the Grammy-nominated Silk Road Ensemble for more than a decade—and the similarly virtuosic, Anatolian-born Erzincan (exemplary proponent of the oud-like baglama/saz)is jazz? Hardly, but at a time when cross-pollination—not just of genres but of cultures—creates an infinite number of hybrid permutations, there's little doubt that the music this duo makes speaks of the same transcendental spirit to which so many jazz musicians aspire.

For this impressive live performance, Kalhor and Erzinan appear as a duo, without The Wind's Ulaş Özdemir, whose divan baglama (or Turkish bass saz) provided a harmonic foundation. It would, perhaps, be unfair to say that it's not missed, but the truth is that, left to their own devices, exploring a repertoire that mixes completely free improvisations with traditional Iranian and Turkish music, as well as The Wind's central theme, Kalhor and Erzinan manage just fine on their own.

Being unfamiliar with the source material doesn't in any way spoil enjoyment of Kula Kulluk Yakişir Mi's hour-long, continuous performance, but it does make capturing the cues that must clearly exist amongst the two musicians that signal the shift from utter spontaneity to explorations of extant, often centuries-old themes less instantly obvious. Still, if conventional western forms are out the window here, it's not hard to hear the duo's shift from the fiery, pedal tone-based "Improvisation II"—impressive enough to garner a large round of applause, midpoint, from the Bursa, Turkey audience at this winter, 2011 performance—into the clearer form of "Deli Derviş," with Kalhor joining Erzincan in a whirling dervish of a melody, though it's the baglama that remains the dominant instrument. Kalhor assumes a more prominent role on the following "Daldalan Ban," demonstrating the timbral breadth of his bowed instrument as he moves from softer terrain to more aggressive, upper register explorations, the duo shifting dynamics from a near-whisper—where Kalhor's instrument begins to sound almost flute-like at times—to more energetic passages where Kalhor's kamencheh soars over Erzincan's pulsating rhythms, sometimes arpegiatted, sometimes heavily strummed.

Kula Kulluk Yakişir Mi closes with The Wind's core melody and a nine-minute medley of "Intertwining Melodies," Kalhor using the back of his instrument's resonating chamber as a percussion instrument before the duo engages in a whirlwind of Mid-Eastern themes, Kalhor moving effortlessly from bow to pizzicato as the two build to a fever pitch and climactic conclusion met with a final, thunderous round of applause. It's a fitting conclusion to a transcendent performance of stellar virtuosity and relentless spirituality.