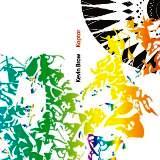 Koptor is the debut recording of Canadian-born, Copenhagen-based drummer Kevin Brow. Accompanied by a group of like-minded peers, including multi-reedist Rob Mosher, pianist Jacob Sacks and ubiquitous bassist Eivind Opsvik, Brow leads his quartet through a program of modern jazz originals that ripple with emotion.

The album's dozen tunes drift effortlessly from one to another, unfolding like an extended suite. Unified by an overriding melodic sensibility, the compositions veer from spry post bop ("Maske I Overmorgen" and "Outer Spokes Center Hole") and expansive tone poems ("How Does Water Flow" and "Jeg Gjorde Det I Forgars") to pointillist balladry ("Imaginary Lines"). Understated does not preclude passion however. "Underground" reveals a visceral side; the tune escalates from a bittersweet theme riding a languorous groove into a furious collective improvisation that climaxes with caterwauling frenzy.

An impressive debut from an up and coming artist, Koptor is deceptive in its simplicity as it reveals myriad layers during repeated listens.