BY DOUG COLLETTE
September 27, 2015
Sign in to view read count 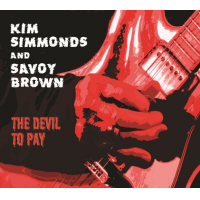 John Mayall may remain the so-called 'Godfather of British Blues," but if that's so, then Kim Simmonds is certainly his consigliere. After all, Simmonds did mentor three members of Foghat, among other stalwarts of the the British blues boom of the late Sixties. And like Mayall, Simmonds has followed a similar path of regular touring and recording, more often than not retaining the moniker of the band he started, Savoy Brown, as on this self-produced , independent work in a trio setting.

Rightfully confident of his skills after some five decades of dedicated work to the genre he clearly still loves and displaying even more courage by beginning this record with a slow mournful blues Simmonds handles all the vocal chores as well as his main axe of guitar (and harmonica to boot, for extra authenticity not to mention variety, on "Oh Rosa"),. But if his singing is heartfelt yet plain, his solo is absolutely eloquent as it closes "Ain't Got Nobody." The clarity of the recording, produced by Simmonds himself, only reaffirms the elegant simplicity of his collaboration with bassist Pat DeSalvo and drummer Garnet Grimm.

The unity of the trio becomes evident on the fast shuffle that is "Bad Weather Brewing," where Simmonds' voice shows its age but in a positive sense: its gruff textures echo the ominous theme of the song itself. In contrast, the same weathered tones suit "Grew Up in the Blues" precluding the self-congratulatory message such songs usually try to convey. Meanwhile, his ringing guitar tone reaffirms the legitimacy of the claim as much as his choice of these redoubtable sidemen, both of whom accompany Simmonds with authority throughout, a quality especially in evidence on the instrumental "Snakin.'"

Having availed himself of ample opportunity to improvise over the years, on stage and in the studio, Kim Simmonds has in turn taught himself the value of economy, particularly critical in the latter environment. Thus, The Devil to Pay contains thirteen tracks with a running time approximately two minutes shy of an hour, many cuts, including "When Love Goes Wrong" and "Stop throwing Your Love Around," ending seemingly too soon for their own good. But the man simply refuses to engage in self-indulgence, making this record all the more entertaining because of the self-discipline it exhibits.

As if he really had to make such an offering, Kim Simmonds tenders a primer of genre styles on The Devil to Pay, not just in multiple variations on the bonafide and wholly appropriate blues-rock closer of of "Evil Eye," or the slow blues of "Got An Awful Feeling," but in the varied tones he coaxes from his guitar; on the latter, it's especially cutting, in the rhythm work as much as the solos and fills, again wholly appropriate to the exorcism of such demons as the lyrics describe. And, of course, education in the blues wouldn't be complete without a slide guitar workout, the fleet, elastic likes of which constitute "I've Been Drinking."

With the likes of wunderkind Gary Clark, Jr. and British bluesmaster Matt Schofield around, this incarnation of Savoy Brown may not be the final word in contemporary blues, but both those estimable artists would do well to hope they sound as vigorously inspired as Kim Simmonds when they celebrate the half-century mark of their respective careers.

Ain't Got Nobody; Bad Weather Brewing; Grew Up In The Blues; When Love Goes Wrong; Oh Rosa; The Devil To Pay; Stop Throwing Your Love Around; Snakin'; Got An Awful Feeling; I've Been Drinking; Watch My Woman; Whiskey Headed Baby; Evil Eye.