By Chris Mosey
September 4, 2019
Sign in to view read count 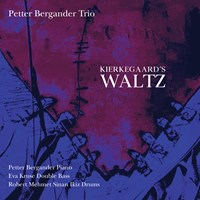 The honouring in popular song of Sören Kierkegaard, author of "The Sickness Unto Death" and other light works has been a long time coming. To be exact, we've waited since his death in 1855 for this moment. "Heidegger's Boogie" and "The Schopenhauer Rag" must surely follow. The curious thing is that Kierkegaard's Waltz is an album of really quite soothing music which, on the face of it, would seem to bear little resemblance to the philosophical musings of the chap it was named for.

Its composer, Petter Bergander, claims otherwise. "He has lingered with me since I read a new book about him, a reinterpretation of his work," he says, "Living earnestly and being true and brave in my choices in life and music has become much more important."

One way or another, this is an extremely pleasant album, remarkable in that Bergander has hitherto been best known for his collaborations with blues singer and harmonica player Louise Hoffsten, hip-hop artist Kaah and funk trombonist Nils Landgren.

Bergander's previous album, The Grand Dance was inspired by his travels to such exotic, far away places as Bangkok, Tokyo, Athens and Accra, although a fair bit of his native land also sneaked into the mix. His own publicity for the album, while muddling metaphors somewhat, explains: "He lets the silhouettes of skyscrapers and the noise of late night street kitchens mix with classic Swedish folk tunes."

With the exception of "The Return of the Afghan Boy," a meditation on the refugee crisis, and "One for Miss G," there are no really strong tunes on this one but all are well-crafted and worthy of a wider audience.

On bass is Eva Kruse, from Hamburg, a former member of the German Jazz Youth Orchestra, and best known for her appearances at the Jazz Baltica Festival. Robert Mehmet Sinan Ikiz, originally from Istanbul, remains on drums.

Kierkegaard’s Waltz; Starman; Lyttela Paradise; The Return of the Afghan Boy; One For Miss G; Laike; My Simple Song; Chickenized; One Night at Fasching.