By Friedrich Kunzmann
October 4, 2019
Sign in to view read count 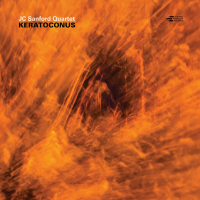 A bubbling ostinato on trombone to the right. Treble register double-bass lines join in the middle. Muffled electric-guitar riffs imitate the same to the left—the guitar's dry tone seemingly hailing straight from a rustic 1960s Telecaster. Drums start banging ahead relentlessly; not in a constant motion though—they stop and go and stop and go, unsure whether what they're doing is allowed or not. They all decide it's fine, let's go ahead with it. This is rock and roll. It's rudimentary and executed with an attitude. But the title track and opener of JC Sanford's newest outing doesn't paint the whole picture—rather it reveals that on this album you can't know what to expect next, but that whatever it is, it will be made by four individuals who are out to have fun.

Earlier in 2019, Minnesota native JC Sanford graced the improvised world with the fastidiously executed Pyramid Scheme (Shifting Paradigm Records), a trio album built around the concept of solely featuring woodwinds. He's now back with fellow Minnesotans and label-mates Zacc Harris on guitar, Chris Bates on bass and JT Bates brushing the metal plates and barrels. What they have to present on Keratoconus has to be some of the most exciting music being made today.

The second cut of the record relieves its predecessor of the punk attitude completely. Rhythmized in a Latin fashion, "Umm, Yeah" sees the quartet spreading a meticulously worked out ballad over just under ten minutes. Here, a modal jazz approach meets classic bop harmony to frame the cool air of Harris' guitar playing, seamlessly alternating between a pristinely phrased solo with comping to JC Davis' best demonstration of his very own Miles-Trombone-Davis. The name-play of course doesn't do the quality of their striking performances justice.

After giving a masterclass on how a ballad is played, "Bates Brothers Boy Band" brings back simple fun. The tune opens with a drum pattern that surely wouldn't sound misplaced on any of The Cure or U2's albums, before the bass joins with vibrant strides that emulate consecutive jumps rather than a walking motion. Midway through the composition—and after a short and tasty bass solo—Sanford lets his trombone declare its melodic proclamations with a not so sober tone that is, if ever, perhaps assumed in speech only in the wee small hours.

"Robins in Snow" is a highly melodic venture that is executed in a deconstructed way—not only performance-wise but also when it comes to the production. Each instrument is appointed an individual space in the room. "JT-Rex" brings back the rougher character of the opening bit and sees Bates drumming the punk out of the bop before the group grow back together for an exciting rendition of "All the Things you are," the sole standard on the record. Here tradition meets the stubbornness of soloists who have their own ideas.

Harris' composition "Zaccfarben" relies on a fuzzy and echo-heavy guitar effect which adds atmosphere to the already versatile set of tunes, before "Selfish Shellfish" sees the listener off the way he was initially greeted—what it lacks in brusqueness, in comparison to the opener, it makes up for in its fittingly rigid execution. What better way to close this extravagant display of virtuosity than with a quirky choir of voices saying "Selfish Shellfish" over and over again, at increasing frequency and increasingly out of phase. A joy to listen to.