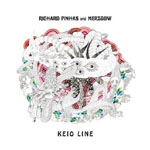 Following up on Metatron (Cuneiform, 2007), widely considered his finest record to date, experimental guitarist Richard Pinhas shifts direction slightly with Keio Line, a collaboration with the uncompromising Merzbow, originator of Japanese noise music. It's an album of ambient soundscapes that prove noise can indeed be beautiful, and that it's possible to dispense with conventional constructs of rhythm, melody and harmony yet still create something both musical and profound.

Pinhas' reference point has always been King Crimson co-founder Robert Fripp, and there are points during the six pieces that make up Keio Line's two discs where he's clearly channeling Fripp's collaborations with Brian Eno, including No Pussyfooting (DGMLive, 1973) and Evening Star (DGMLive, 1975). But Pinhas' largely harmonically static but often still melody-driven guitar layers, emerging out of Merzbow's throbbing, hypnotic electronics on the 26-minute "Shibuya AKS," still sound like guitars, albeit heavily processed. With the concept of Frippertronics—primitive looping created by linking together two Revox reel-to-reel tape recorders—the starting point for the two guitarists' life-long sonic explorations, it's remarkable to see the divergent paths each has taken, with Pinhas' own flavor of guitar-as-orchestra electronic processing and looping, called Metatronics; a more guitar-centric approach as opposed to Fripp's Soundscapes, which utilizes sampling to emulate a more diverse sonic landscape.

While the idea that noise can be beautiful may be difficult to grasp—and there are parts of Keio Line that are undeniably jagged, angular and challenging to the ear—it's still quite extraordinary just how appealing it is. Pinhas and Merzbow find ways to create form that may be less than clear when compared to orthodoxy, but is present nevertheless. There's also an element of interaction akin to groups like Norway's Supersilent, with Merzbow and Pinhas responding to each other, often with great subtlety, even greater unpredictability and consistently empathic results. As these extended and completely improvised pieces (the shortest is eight minutes, the rest are in excess of sixteen) evolve, the two sometimes alternate positions of dominance, but more often than not, share the landscape with a mix of looped guitars, sustained melodies and washes of sound that are generally industrial in origin, but are just as often softened into textures that pulse with a persistent rhythm, like a visceral heartbeat.

On an album where texture is an equal partner to the spares use of conventional musical markers, the mix is a third critical aspect, and the way that Pinhas and engineers Laurent Peyron and Duncan Pinhas have shaped the music is nothing short of cinematic. Hypnotic, lush, and at times dark and menacing but elsewhere soothing and tranquil, Keio Line's greater reliance on abstraction makes it a more challenging listen than Metatron, but as an album that signals the beginning of a new musical relationship, it's a powerful harbinger of even greater things to come.