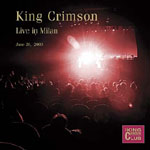 It might seem that King Crimson co-founder/guitarist Robert Fripp's mail order-only King Crimson Collectors Club (KCCC)—an ongoing series of live performances in either CD or download-only formats— might be overkill. But for the committed Crimhead, "enough" and "King Crimson" don't belong in the same sentence. Fearlessly and perennially looking forward with each new incarnation and taking risks each and every night, some shows are undeniably better than others. But every show made available has something distinctive to offer the committed fan. KCCC #39: Live in Milan June 20, 2003 captures the last commercially recorded incarnation early into its final European tour before Warr touch guitarist Trey Gunn's departure and, while it may have a few more warts than other KCCC recordings, they only serve to make Crimson more human.

Amongst the more noticeable warts: a barely perceptible ungluing of the interlocking guitars near the end of the Neuvo Metal anthem, "Level Five"; a false start into "The ConstruKction of Light" before a gritty "ProzaKc Blues," despite featuring one of guitarist Adrian Belew's best vocals; and momentary sonic glitches during what are meant to be silent sections during the power-pop "Dinosaur" and pulsing complexity of "Larks' Tongues in Aspic: Part Four," the latter just before Belew delivers one of the most blistering solos of any documented version.

The show is similar in structure to many other shows around that time, weighing heavily on material from the recently released The Power to Believe (DGM Live, 2003). Still, a special energy imbues some of the material, and a particularly gossamer-like feel to the intersecting guitars of "The ConstruKction of Light." "Elephant Talk"—a favorite dating back to the '80s Crim with Fripp, Belew, bassist Tony Levin and drummer Bill Bruford—plods along more, well, elephant-like, courtesy of the overdriven bottom end of Gunn's touch guitar and sports a simply stunning, never-before-documented Middle Eastern-inflected solo from Belew that also layers either his radically processed voice or an effect applied to his guitar that's unique, even in his seemingly infinite sonic palette.

There have been briefer "Introductory Soundscapes" on other Crimson live recordings of the period, but this is the first time a full-length opening set by Fripp, nearly 26 minutes long, is included. Ethereal and tranquil, it's the calm before the storm as it segues into the equally rarified miniature, "The Power to Believe I," before Crimson—with drummer Pat Mastelotto's acoustic/electric kit thundering across the stereo landscape—hits the crowd with the one-two punch of "Level Five" and "ProzaKc Blues."

Other highlights are an especially poignant "The Deception of the Thrush," a screaming, frantically strummed Fripp solo over the head-banging riff of "Facts of Life" and the texturally rich, part Gamelan "The Power to Believe II."

Live in Milan may not be essential Crimson, but there are plenty of rewards to differentiate it from others in the series, and the warts-and-all approach just cements Crimson as a group that takes risks and isn't afraid to show its tremendous strengths...and very occasional weaknesses.