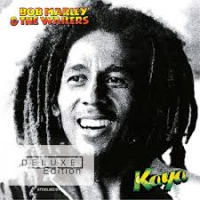 It's telling that the photos of Bob Marley adorning the first half of the comprehensive booklet with this 'Deluxe Edition' of Kaya show the late third-world icon beaming and smiling right and left, much as he does on the front cover. In contrast, the photos interspersed with song lyrics and recording detail in the latter half of the insert display an intense man unafraid to address serious issues, the likes of which he mainly avoided, and was thus criticized for, on this his seventh Island release.

Expanded editions of Bob Marley's catalog have always contained plentiful unreleased and bonus material and this edition of Kaya is no exception, and significantly so. The inclusion of an alternate version of "Smile Jamaica," written and released during a period of serious turmoil in the author's home country, puts paeans to the sacred herb ("Easy Skanking"), and other earthly delights ("Misty Morning," "Sun Is Shining") in a different context than by themselves as on the original ten track album.

What really belies the complacency "Satisfy My Soul" suggests is the early groove established and maintained by The Wailers as a band (magnified by the clarity of sound on both CD's). Steve Morse's essay details the extent to which Marley provided nothing but the best equipment for his band and it's well known what strict rehearsal regimen the leader imposed on his accompanists. But the natural rhythm arising from the ensemble, often including horns as on "Running Away" (as they supply contrast with and accent to vocalists The I-Threes) carries over into the recordings of the concert as contained on this second CD: the singing and playing conjure a deeply absorbing atmosphere.

Even as Bob Marley invokes "Positive Vibration," The Wailers dig into a groove that becomes progressively deeper with each song performed during this 1978 concert in Rotterdam. Junior Marvin's piercing guitar on "The Heathen" and "Them Belly Full (But We Hungry)" serves to open up the Jamaican pocket even wider so that the sequence of tunes, moving into politically-oriented songs such as "Rebel Music (Three O'clock Roadblock" and the deceptively sly "I Shot the Sheriff," through to the fevered culmination of "War"/"No More Trouble," furthers the acuity of the playing and vice-versa.

A return to the more personal culls from the studio album ("Easy Skanking") and prior discography such as "No Woman No Cry," from Natty Dread (Island, 1974), not only gives the lie to accusations Marley was abdicating his cultural spokesman role, but puts the 1978 originals in correct perspective. On the contrary, the seamless integration of this range of material reaffirms this Third World celebrity's comparable skills as songwriter, recording artist and performer.

As much as he was a devout Rastafarian, Bob Marley saw himself as a citizen of the world and The Wailers as his co-ambassadors on behalf of enlightenment both personal and political. In that context Kaya may be one of his most artful statements and this two-CD set thus one of the most important entries in his contemporary discography.