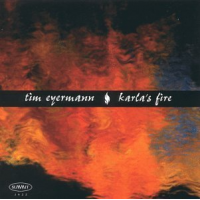 DC-area saxophonist Tim Eyermann proves, with his latest east coast offeringKarla's Fire, that contemporary jazz and more traditional formats can co-exist together on the same program and even compliment each other. The contemporary-oriented songs, including the opener "Just a Thought," the title cut, the Kenny Loggins ballad "Now and Then," and "Weekend Update" feature enjoyable melodies and good jazz sensibilities. "My Funny Valentine" features outstanding solos from bassist Bill Foster and high-in-the-stratosphere trombonist Rick Lilliard, on top of contemporary finger-snapping bass and funky drum licks. Eyermann improvizes skillfully throught the program, but really smokes on "Secret Love," the most straight-ahead romp on the disc; pianist Fred Hughes and bassist Tom Williams also cook. Eyermann invited guitarist Larry Coryell to participate on two Luis Bonfa chestnuts (or should I say Brazil nuts?)