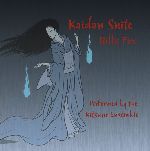 Billy Fox is primarily a composer, although he does play various percussion instruments on both his fine previous release The Uncle Wiggly Suite (Clean Feed, 2007) and Kaidan Suite. He approaches composition eclectically, but there is a decided classical undertone. Note that both recordings are suites, and thus are integrated works, meant to be listened to from beginning to end. Within the composed structure however, he allows much freedom for improvisation, regardless of whether it is of the classical or jazz type, which differ mostly in rhythmic feel.

Kaidan Suite attempts to recreate in musical form the Japanese practice of hyakumonogatari kaidankai, which means telling a series of ghost stories in diminishing candlelight. Furthermore, these stories are not just meant to be scary, but to expose wrongdoing and violence, particularly to women in a misogynistic society. The ghosts return many times to exact revenge and expose right and wrong.

Musically, the suite includes the use of Japanese scales and playing styles that invoke, at least in the beginning, the requisite cultural setting. The sense of stories involving eeriness, fear, tension, betrayal and disembodied revenge is maintained throughout in rising and falling waves as the music moves away from and returns to Japanese references.

The Kitsune Ensemble is evenly split culturally by Westerners playing the lead instruments (flute, clarinets, cello and vibraphone) and Japanese in the rhythm section (piano/organ, bass and drums). Whether the players need knowledge of the musical and/or cultural traditions to be "authentic" is obviously unknown, but in practice it is seemingly irrelevant.

While the listener cannot help but make the Japanese associations by the cover illustration and track titles, the music stands on its own and is very successful in creating the intended mood, even when it moves away from the Japanese scales and undertone.

Drama is what Fox is after, and the expert control of his musical forces is evident throughout the suite. Given the restrictions that are imposed on them, the freer solo sections impress with their appropriateness. The soloist never forgets the mood to be created or dramatic part to be represented.

From this perspective, Kaidan Suite is successful. As the thirteen tracks are played in sequence, the music pulls the listener along, creating an almost visual stage. While a live performance with controlled lighting would be a wonderful, and possibly scary, experience, listening to this finely crafted music is the next best thing.