Isaiah B. Brunt: Just the Way That It Goes 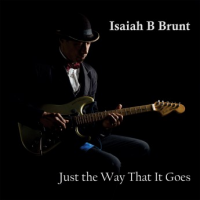 Less amorphous than most present-day jazz has become, contemporary blues has remained, more or less integrated and within recognizable genre. Not that classifications provide anything more than an inferior roadmap to the new listener, they do come in handy. Australian Guitarist, composer, and producer Isaiah B. Brunt has managed to stake out a corner of the blues market not with a slash-and-burn testosterone-boogie approach, but, rather, a soft, carefully nuanced approach that is as well-defined as it is conceived.

Brunt is best known for his work behind the console serving as producer and engineer for the Julio Iglesias orchestra, the Goo Goo Dolls and American Idol's Randy Jackson. Wow. The music Brunt makes on Just the Way It Goes, recorded in New Orleans, is stylistically light-years from those acts. In a most understated way, Brunt displays a superior knack for composing and playing perfect off-shoot and variants of the durable "12-bar blues" tradition that is enjoying it current centenary plus some.

Brunt favors minor-key pieces with a solid pulse that is careful to never cause whiplash. This is refined blues and R&B that has more in common with single-barrel issued bourbon than moonshine out of a Kerr jar. The opening "She's so Fine" introduces Brunt's organic approach to the slide guitar, played on a vintage 1970s Fender Stratocaster. His vocals are easy, and if not completely suited to the material, bears that authentic and sincere element that makes the Broadway lyricist's performance of his or her own work so listenable. His slide guitar is easy and precise. There is no overplaying here, only the notes necessary to convey the mood.

"River Runs High" and "With a Kiss" are slow shimmies, carefully paced well below a simmer. These are tone moods framing well Brunt's understated vocals and guitar and sparse accompaniment by his crack rhythm section. "Precious Stone" offers a stark juxtaposition to Brunt's overall approach with an almost straight- ahead 12-bar blues that features his most assertive vocals and slide guitar. From this straight reading, Brunt contrasts with the album closer, "Which Way to Go," a high ballad challenging the status quo of the blues.

She’s So Fine; Let Your Heart Know; The River Runs High; Precious Stone; With a Kiss; Lovers’ Blues; Just the Way That It Goes; Never Give Up; Which Way to Go.

Title: Just the Way That It Goes | Year Released: 2015 | Record Label: Self Produced

About Isaiah B. Brunt