By Jack Bowers
September 18, 2005
Sign in to view read count 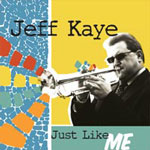 This breezy, boppish blowing session by Los Angeles-based trumpeter Jeff Kaye's quintet calls to mind Blue Note dates from the '50s and '60s featuring the likes of Lee Morgan, Horace Silver, Wynton Kelly, Freddie Hubbard, McCoy Tyner, Cedar Walton, Wayne Shorter, Tommy Flanagan, and so many others. It's most likely not destined to become a classic, as some of those earlier albums were, but is nonetheless bright and agreeable on its own terms.

As was often the case with the Blue Note sessions, Just Like Me opens with a finger-snapping blues, Rick Hils' upbeat "Harvey Headbanger, dedicated to Kaye's long-time friend and employer, the late Ray Charles. Kaye was a member of Charles' band from 1984-92, gigged with him on and off for the next nine years, rejoined the band in 2001-03, and performed on the soundtrack of Ray, the award-winning film about Charles' life. Tenor saxophonist George Harper and drummer Paul Kreibich are also alumni of the Ray Charles Big Band.

Kreibich and Harper each contributed one tune—Kreibich the samba-like "Partido in Mar Vista, Harper the African-influenced "Shalabunga —while bassist Isla Eckinger wrote "Two Deaf Lice (based loosely on the nursery rhyme "Three Blind Mice ) and the ballad "Jay, a heartfelt tribute to the late saxophonist Jay Migliore. Kaye composed the pensive bossa "Sozinho and the prancing "Other Steps, based on Coltrane's "Giant Steps. Completing the program are Brian Mitchell's playful "Real Gone (on which Kaye uses a Harmon mute), Dizzy Gillespie's groovy "That's Earl, Brother, trombonist John Boice's placid "J.B.'s Waltz, and the seldom-heard standard "Everything I Have Is Yours (once a big hit for vocalist Billy Eckstine, and here a showcase for Kaye's expressive trumpet).

Kaye's temperament is quite pleasing, especially on flugel, while Harper harbors some Mobley in his soul and his sound. Together they form a sturdy front line and are deftly supported by Eckinger, Kreibich, and pianists John Campbell (six tracks) or Josh Nelson (five), with Tony Poignsett's bongos added (a nice touch) on "Partido. There's nothing here that hasn't been done before—much of it by the Blue Note artists cited earlier—but on the other hand, nothing that isn't earnest or perceptive, either. A well-designed 65 minutes of straight-on jazz bolstered by crystal-clear sound.

Harvey Headbanger; Two Deaf Lice; Sozinho; Real Gone; Partido in Mar Vista; Everything I Have Is Yours; That