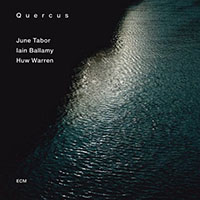 Awaiting release for more than seven years, Quercus is not the first time ECM has branched into the realm of traditional British music combined with jazz improvisation. Unlike the rawer and more unfettered freedom of producer Steve Lake's inspired pairing of singer Robin Williamson with improvisers including violist Mat Maneri, bassist Barre Phillips and Swedish traditionalist Ale Möller on recordings like The Iron Stone (2007), however, Quercus is a more refined, elegant and dark live recording that pairs renowned British singer June Tabor with saxophonist Iain Ballamy—already known to ECM audiences for his electro-centric collaboration with Norwegian percussionist Thomas Strønen in Food, last heard on Mercurial Balm (2012)—and pianist Huw Warren, who like Tabor is making his first ECM appearance here.

This live recording from March, 2006 may be long overdue, but this is not something for which ECM is to blame. As far back as the trio's sublime performance at the 2007 Punkt Festival, in Kristiansand, Norway, Ballamy and Warren were talking about a recording looking for a label. When ECM came into the picture is unclear, but it's fortuitous—as much for its intended audience as the musicians that made the record—that it did.

Tabor, Ballamy and Warren have intersected before. Ballamy first guested in 2005 on Tabor's At the Wood's Heart (Topic), which, also featuring Warren, who'd been playing with the singer for nearly 20 years, debuting on Aqaba (Topic, 1988). At the Woods's Heart featured other musicians, including longtime Tabor accompanist, guitarist Martin Simpson, who'd made her Abyssinians (Shanachie, 1983) a classic of dark, often depressing but still thoroughly compelling traditional fare, but it was clearly where the idea of Quercus—both the name of the trio and its debut recording—first germinated.

Tabor's reputation as a serious singer who'll not take on a song unless it completely resonates with her on some level means that the song selection which has been key to her success since emerging in the mid-'70s with Steeleye Span's Maddy Prior in Silly Sisters—a perfect pairing if ever there was one—is just as essential to Quercus' achievements. The opening "Lassie Lie Near Me," a traditional tune with lyrics from the pen of poet Robert Burns, may be, at its core, a love song, but its minor-keyed structure and Tabor's delivery ensure its painful longing remains intact. Tabor is not a singer to take great liberties with a melody; instead, her interpretive skills are far subtler—the slightest inflection or barest turn of phrase carrying great weight, even when delivered at a near-whisper, and her earthen, low-register range adding even further to its gravitas.

Warren, like Ballamy, has established a reputation as a player capable of just about anything, whether it's interpreting the music of Brazil's Hermeto Pascoal on Hermeto+ (Basho, 2009) or adding subtle electro-acoustics to his intimate duo recording with bassist Peter Herbert, Everything We Love (Babel, 2006). Capable, for Ballamy and Warren, means the freedom to play the song and respect its intent, rather than engage in unnecessary and, in this context, irrelevant virtuosic displays. That said, when Tabor stops singing and leaves the two to their own devices, the result is often surprising, almost always lyrical and relentlessly beautiful. Warren's solo feature, "Teares," may be an original composition but, inspired by 17th century composer John Dowland, is completely in context with the rest of the material, and thoroughly demonstrative of the pianist's touch, taste and tack. Quite uncannily, Ballamy's introduction to "Near But Far Away" feels like an inevitable follow-up, as if it were an intended segue between Warren's final notes on "Teares" and Tabor's entry, 50 seconds later, on "Near But Far Away"—even though it's not necessarily so.

As dark and brooding as much of Quercus can be—with subjects ranging from political statements about colonization and war couched in songs of love ("As I Roved Out," "The Lads in Their Hundreds"), and similarly intimated matters of trust ("Near But Far Away")—there is the occasional bright spot. Harry Warren's "This is Always" is Quercus' most overtly jazz-centric, optimistic and downright schizophrenic tunes: Ballamy's opening solo is filled with unexpected fire, bolstered by Warren's propulsive support, only to slow to a halt for Tabor's entry and a shift to her rubato deliver of Mack Gordon's romantic lyrics, only to return, once again, to the intro's more energetic feel for the coda, which resumes once Tabor has finished singing. Much of Quercus' eleven-song, hour-long program is predicated on such contrast, with Tabor acting as the focal point around which her partners' improvisational forays ultimately rally.

As far back as Abyssinians, Tabor's a capella features have significantly defined her personal style; here, her delivery of "Brigg Fair"—a song that should be buoyant and joyous but is, instead, deep, dark and brooding—is completely captivating and utterly commanding.

That it's taken this long for Quercus to see the light of day only makes anticipation and its ultimate reward all the more better for those with the good fortune to have caught this exceptional trio in performance. For those who haven't, hearing Quercus for the first time may well engender the same fervent hope: that seven more years don't have to pass again, before Tabor, Ballamy and Warren record a follow-up to an unparalleled recording that marries centuries of British traditionalism and thoroughly modern improvisation into something altogether new and astonishingly successful.

Lassie Lie Near Me; Come Away Death; As I Roved Out; The Lads in Their Hundreds; Teares; Near But Far Away; Brigg Fair; Who Wants the Evening Rose; This is Always; A Tale from History (The Shooting); All I Ask of You.