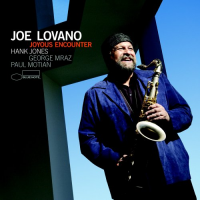 A lot of people seemed to like Joe Lovano's all-ballads record from last year, I'm All For You (Blue Note), and I was one of them: I thought it was his best since Trio Fascination: Edition One (Blue Note, 1998). So it's not that surprising that the All For You quartet of Lovano, pianist Hank Jones, bassist George Mraz, and drummer Paul Motian reconvened in October of 2004 to record Lovano's new Joyous Encounter. Good though the ballads session was, it gave an incomplete picture of what this band can do, and this new album paints a broader picture, mixing ballads with mid- and up-tempo material.

Other than the avoidance of an all-ballads format, the similarities to last year's album are numerous: several standards ("Autumn in New York," "Alone Together"), a Coltrane tune ("Crescent"), a Monk composition ("Pannonica"). Instead of one song by Jones' late brother Thad, we get three—a welcome attempt, and I suspect a successful one, to elevate Thad Jones to the canon of top-tier jazz composers.

So it's a similar recording in many ways. Is it as good as the last one? Emphatically yes. The group sounds more blended, yet its members are more individually like themselves. With the passing of Jones' other brother, Elvin, it's no outrageous statement to call Motian the greatest living jazz drummer: one suspects he could be given only one cymbal—a cracked one at that—and still be the answer to any jazz combo's prayers. Octogenarian Jones plays with confidence, swing, and florid precision. Mraz is the least assuming player here, usually content to hold down the beat, but his melodic, sure-handed solos (as on, say, "Pannonica") make as strong a statement as the other three. Lovano himself plays majestically throughout. This group has phenomenal chemistry.

Lovano's tune "Bird's Eye View" is, not surprisingly, a boppish number with an immediately memorable theme. Mraz' walking bass keeps time alongside Motian's tight-coiled cymbals and deadly snare work. Jones comps at such a high level that his playing can be regarded at all times as an alternate solo. "Alone Together" is a pristine, shimmering ballad duet between Lovano and Jones; Jones' unerring left-hand chords keep the tempo rock-solid and Lovano plays some yearning, deep tenor here. Oliver Nelson's "Six and Four" is all hard, merciless swing, and the tiny differences in tempo among Lovano, Jones, and Motian make the song feel polyrhythmic and mysterious.

My favorite, though, is Jones' own composition, "Consummation," where Lovano's jabbing, almost staccato tenor and Motian's snare seem locked together, as if generated by the same mind. They're just ahead of the beat and Jones plays just behind it, providing delicious tension. And Jones' piano break towards the end of the song is sublime. There's nothing wrong with this song—and while it's playing, the same applies to the world, the human race, and all existence.

This is the rare mainstream jazz superstar group that lives up to the excitement generated by its roster.