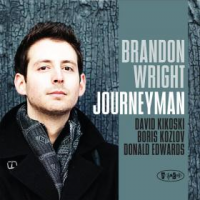 Saxophonist Brandon Wright sells himself a little short with the title he selected for his sophomore release. While he has been honing his skills while working in the employ of artists like trombonist John Fedchock, E Street Band drummer Max Weinberg and trumpet legend Doc Severinsen, he's hardly an apprentice at this point. Wright's debut—Boiling Point (Posi-Tone, 2010)—gave notice that a new and exciting saxophone slinger had entered the picture and Journeyman helps to confirm his status as one of the brightest, up-and-coming talents on the scene today.

On his first album, Wright went with a quintet that featured a two-horn front line. This gave him an opportunity to play off of, and react to, trumpeter Alex Sipiagin, as both men carried the weight of the music together, but Wright goes it alone here. By choosing the quartet format, Wright draws greater attention to his own playing, while also establishing a stronger connection with the rhythm section.

The three men that fill out the roster are all connected to Wright through their mutual work in the Mingus Big Band. This helps in establishing a strong level of comfort and communication between all parties involved. Pianist David Kikoski is the only holdover from Boiling Point and he acts as a foil for Wright, while the bass-and-drums team of Boris Kozlov and Donald Edwards provides expert support. They lay the groove groundwork when the music calls for firm hands, but they also know how to take a step back and trace lines around the leader's compositions.

Wright wrote six of the ten pieces on the album, including the driving opener ("Shapeshifter") and a winning foray into funk ("Walk Of Shame"), and he fills out the rest of the program with some unusual covers. While a classy take on "The Nearness Of You" is par for this type of course, the inclusion of '90s radio staples from Oasis ("Wonderwall") and Pearl Jam ("Better Man"), along with a number from The Muppets Take Manhattan (Tri-Star Pictures, 1984), are not. Wright's choice to include such songs has nothing to do with pandering to pop fans but, rather, everything to do with his identity and coming of age influences. He grew up with this material, but rather than simply spit these songs out in their original form; he molds them to suit his ideas. "Better Man" touches on the melody of the original in brief, allowing for Wright's instrumental voice to eclipse any Eddie Vedder influence, and "He'll Make Me Happy" provides a swinging conclusion to the album. "Wonderwall" proves to be more loyal to the original than the others, but it's still a far cry from the source.

Journeyman isn't about the act of apprenticing in music. It's about the next step in the journey and Brandon Wright is more than ready for it.