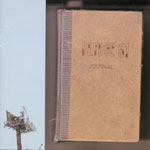 Windy City-based composer, multi-instrumentalist and leader Ken Vandermark has long split his time between leadership duties and membership in collective ensembles. Bridge 61 is his newest collaborational foray. Sharing composing duties with his fellow improvisers in this democratic unit, Vandermark enables greater exposure for the writing talents of his bandmates by virtue of his relatively popular status among fans of improvised music.

Two longstanding sidemen join Vandermark here—drummer Tim Daisy (Vandermark 5) and bassist Nate McBride (Spaceways Inc., Tripleplay)—along with a new arrival, bass clarinetist Jason Stein. Vandermark penned half the tunes, with the rest split between Daisy and McBride, whose contributions are every bit as inventive and intricate as his are. This stylistic synergy lends a cohesive, dynamic sensibility to the proceedings.

Daisy's stylistic versatility is impressive. His powerhouse trap set throttling on the opening and closing tunes is as rocking as his fragile percussive accents on the neo-classical "A=A/b=b" are sublime. McBride alternates between acoustic and electric bass, but during his plugged-in moments the ensemble really soars. His stirring solo on "Shatter" is a highlight. With a forceful tone and passionate delivery, newcomer Jason Stein more than holds his own, especially during an a capella duet with Vandermark's tenor sax on "Super Leegera."

Vandermark concentrates on a small collection of horns but tends to gravitate towards timbral extremes, often preferring clarinet or baritone sax to his usual tenor. His baritone work in particular sounds more expressive with each release.

This is advanced ensemble music, not simple head melodies with endless solo excursions. Intense tonal dynamics and quicksilver rhythm shifts are everywhere. Well beyond traditional A-A-B-A structures, these pieces are more akin to miniature suites than simple blowing tunes. Switching gears effortlessly between blistering, raucous intensity and austere, neo-classical formality, the ensemble handles these changes with a confidence that belies their intricacy.

The opening cut, "Various Fires," dedicated to the seminal krautrockers This Heat, is a potent demonstration of the ensembles visceral intensity. Veering from a miasma of bellowing baritone sax, thrashing drums, spastic bass clarinet and fuzzed-out electric bass, the piece eventually launches into pulverizing rock riffing that surpasses its dedicatee in energy and passion.

Closing with the staggering electric stomp of "Shatter," Vandermark bookends the album with two powerful tributes. Dedicated to guitarist Sonny Sharrock, "Shatter" invokes his talent for melody, yet just as readily conjures the rousing feedback drenched anthems of Hendrix. In between, the quartet journeys unfettered, from the chamberesque arc of "Dark Blue, Bright Red" to the blistering free bop changes of "Atlas" and the funky electric opulence of "Nothing's Open."

Vandermark's extensive discography is filled with stellar one-off collaborations now relegated to permanent dormancy, reminders of collaborations with great potential left unfulfilled. Bridge 61 is as fine an ensemble as Vandermark has organized in the past—long may it endure.