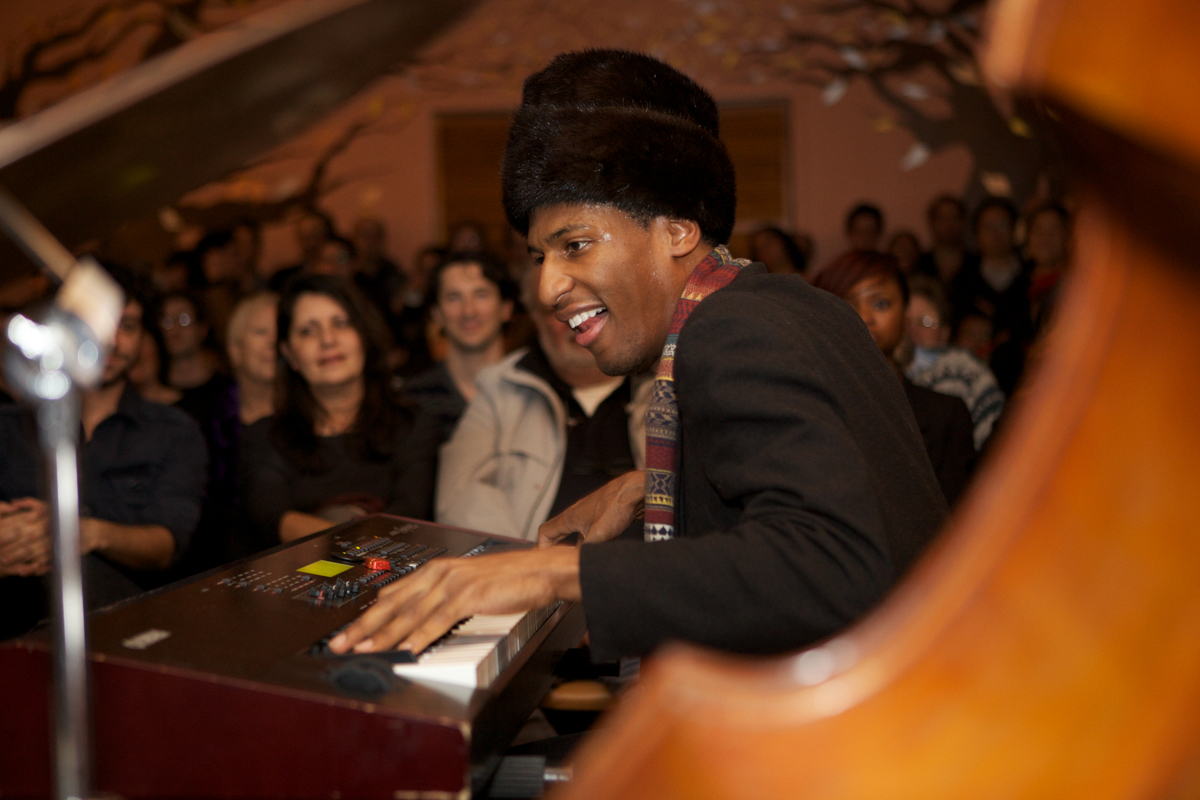 view slideshow
By BOB KENSELAAR
December 31, 2012
Sign in to view read count
Jonathan Batiste and the Stay Human Band
National Jazz Museum in Harlem
Metropolitan Community United Methodist Church
New York, NY
December 12, 2012
Go to any of the major New York City jazz venues and you'll sometimes get the feeling you're in church. The crowds are polite and attentive; some people might even have their hands folded on the tables. So, if you're hoping for something along these lines from Jon Batiste and Stay Human, you'll be sorely disappointed. Expect to be on your feet, clapping your hands and dancing when you see these guys, even if it actually is in church, as it was on this cold December night. And this isn't because they're playing ersatz, lowest-common-denominator jazz that's really pop dance music. This is the real deal, steeped in Batiste's Louisiana roots, a wild gumbo that mixes in all the sounds of New Orleans, from traditional jazz to R&B and funk, not to mention some gospel, Ellingtonia, bebop and contemporary jazz.
The show was part of the Jazz Is: NOW! series of the National Jazz Museum in Harlem, that Batiste has been hosting for the last three years; he's on staff at the Museum as Associate Artistic Director. In the past year, he's brought his Stay Human Band with him for the series. In addition to Batiste on keyboard and melodica, the group includes Eddie Barbash on alto sax, Ibana Ruhumbika on tuba and valve trombone, Philip Kuehn on bass, and Joey Saylor on drums.
The community room was packed at the Metropolitan Community Methodist Church on 126th Street—located a block down from the Museum—and things got underway with Batiste strolling in holding his melodica up to his lips, joined by Saylor on tambourine and Ruhumbika on tuba, doing "O Tannenbaum" like a New Orleans-style marching band. The audience clapped them in while the band settled in their places, with Batiste at the electric keyboard and Saylor at his drum kit, with Kuehn on bass.

Batiste's "Kindergarten," partly based on "Sweet Georgia Brown," was a special highlight, with the keyboardist showing off his dexterous, virtuosic approach, touching on an encyclopedic range of genres, including some dense, post- modern jazz and a short bit that—despite sticking to a Fender Rhodes or Hammond B3 sound otherwise for the evening—recalled Herbie Hancock on clavinet in the 1970s. Barbash's alto sax break and chromatic flurries also stood out. The tune was followed by "Summertime," featuring Ruhumbika's lyrical solo introduction on valve trombone, Batiste's easy vocals, and Barbash's sweet-sounding channeling of Duke Ellington saxophonist Johnny Hodges.

ADVERTISEMENT
Next up was a solo spot for Joe Saylor, but not a typical jazz drum solo. The drummer pulled his floor tom up from his drum kit and dropped it into the center of the semi-circle of the room that served as the stage, and just played that drum alone. Saylor got every possible sound he could out of it, stepping on the top drum head with his foot and hitting his sticks against the floor and the bottom drum head, inspiring one audience member to get up and dance alongside him for the better part of the solo. 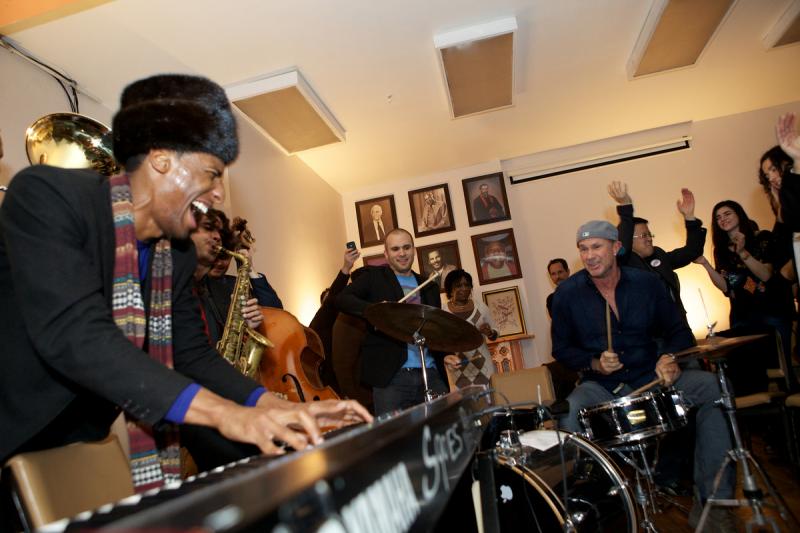 Batiste invited several special guests to join the show: Duwende, an award-winning, beat- boxing contemporary a cappella vocal group, performed Michael Jackson's "Will You Be There," as well as the Christmas carol "Do You Know What I Know." Toward the end of the show, alto saxophonist Hailey Niswanger, a 2011 Berklee grad and charter member of the school's elite Global Jazz Institute, joined the Stay Human Band for a blues. And for the finale, drummer Chad Smith of the Red Hot Chili Peppers sat in for an incredibly exciting performance. Loosely formed around "God Rest Ye Merry Gentlemen," it had the whole room standing and clapping in rhythm, with most of them dancing, shouting, or whistling, too. But it wasn't the rock drummer that sparked all this energy—this had been building from the start of the night, and at the close of the tune, Smith fittingly gestured with a deep bow over to Batiste and his band.

Loren Schoenberg, Artistic Director of the National Jazz Museum in Harlem, had some words of introduction at the program's outset, saying that Jonathan Batiste was still in high school when Schoenberg and Museum colleague Christian McBride first heard him play. "We both looked at each other, and I said, 'Now, there's a diamond in the rough, but definitely a diamond.'" That was only about ten years ago, so it seems clear that even more brilliance can be expected from this jewel of a jazz musician in the years to come.