BY ELLIOTT SIMON
September 17, 2005
Sign in to view read count

I met Handy. I spent a whole day with him. He called me the white boy with the colored fingers. That was a big compliment

When the Grateful Dead sang a hundred verses in ragtime to "Ramble On Rose, it was no accident that the leader of their conjured-up band was Crazy Otto. Their reference was to ragtime pianist Johnny Maddox, whose Crazy Otto Rag released in 1955, sold over 2 million copies and in the process became the first million selling all piano recording in history. Maddox, who lives in Gallatin, TN, continues to travel twice yearly to the Diamond Belle Saloon in Durango Colorado's Strater Hotel where he plays two extended solo engagements. Releases like Red Hot Ragtime, Vol. 1 (Crazy Otto Music) impress not only with their clean sound but also with the way Maddox infuses well worn classics with new life. Tunes that, through overplaying and hackneyed arrangements, can become somewhat anachronistic have their inner glory revealed through precise phrasing, a wonderful left hand, blinding speed and a unique style that Maddox has crafted over the years. 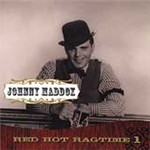 A ragtime historian whose sheet music collection numbers over 200,000 and who can play thousands of pieces from memory, Maddox easily defines his genre and differentiates it from jazz. "...you play a steady marching bass with your left hand and the right hand works against the left...that's what ragtime is...and you can rag anything...you can rag a hymn, you can rag a brand new piece of music today as long as you are playing that steady marching bass and the right hand working against the left...you were supposed to play it as it was written...jazz...you could take liberties with the music...that's absolutely the only difference...and ol' Sidney Bechet said its (all) ragtime no matter how you look at it. Things are of course not quite that simple and when asked if he plays it as it is written the answer is a resounding "No!...it has to be me...if I'm trying to play something...it comes across stiff or stilted...I have to express me... 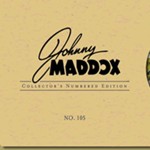 True to his word, Maddox does infuse himself into his music and when you hear "12th Street Rag played the Johnny Maddox way, it is like hearing it for the first time. Maddox began in show business in 1939 and started recording in 1950, his 50 albums and 87 singles total over 11,000,000 in record sales. Unfortunately, most of his output has remained unreleased on CD. Crazy Otto Music however, has begun to change that with recent reissues. A jewel of this effort is a three CD collectors edition of solo piano, 3CD Collector's Edition Box Set, with beautifully illustrated booklets. Period sheet music covers and Johnny's own thoughts on each song personalize the listener's encounter. Each CD reflects a theme; be it the Southern flavored Back Home in Tennessee, Cowboys and Indians, with its homage to the West or my personal favorite, Where the Southern Crosses the Yellow Dog, a tribute to W.C. Handy. Johnny's own arrangements reflect his scrupulous approach to detail and validity. He recalled the time in 1951 that he looked up W.C. Handy in NYC to make sure he got it just right, "I met Handy. I spent a whole day with him. He called me the white boy with the colored fingers. That was a big compliment...I wanted to know the original dance tempos that he played...when he was in Memphis in 1908, 09...I wanted to know how he originally played the Memphis Blues, the tempo he played it in, and the St. Louis Blues. Because most people play those blues so slow they will put you to sleep. But they were not played that a' way way back, they were rags actually.

Likewise, Johnny's classic Dixieland Blues has been given special re-packaging that includes a variety of computer accessible pictures, video clips and interviews. The session itself, features top jazz players and though recorded over 40 years ago hasn't lost any of its incredible power. From the opening assault of the Original Dixieland Jazz Band's "Bluin' the Blues through W.C. Handy classics and the sweet Dixieland of pieces like Spencer Williams' "Tishomingo Blues the band cooks. Though Johnny may consider himself srictly "ragtime" he is as jazz-y a ragtime pianist as there is and his skills in that regard enable the session to come off as a "jazz" success. With Red Callendar's tuba pumping the bass throughout, drummer Nick Fatool, Mannie Klein on trumpet, Matty Matlock's searing clarinet work, Nappy LaMare's banjo, and Moe Schneider's trombone, Johnny remembers the session as a somewhat daunting experience that magically came together. "I was thrown in with a jazz group....I'm ragtime strictly...I guess I was in awe of those musicians that I worked with because they were such famous and well known musicians. I was the youngest one there. We walked in the studio and just did it...I'm the only one that is alive on the whole record. Johnny Maddox is certainly still very much alive and well and as one of America's greatest living ragtime pianists he is a national musical treasure.

Visit Crazy Otto on the web.