By Marcia Hillman
August 8, 2006
Sign in to view read count 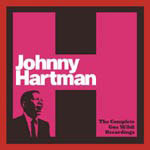 Johnny Hartman recorded these 25 songs, all standards and each a special performance, for Gus Wildi's Bethlehem Records during 1955 and 1956. On the first twelve tracks (released on From The Heart), Hartman is backed by trumpeter Howard McGhee, pianist Ralph Sharon, bassist Jay Cave and drummer Christy Febbo. Hartman approaches each song in a straightforward way, using his voice to caress the melodies. McGhee and Sharon contribute tasty fills on all tracks, and McGhee delivers a wonderful solo on "Moonlight in Vermont.

The next four tracks (from All Of Me) feature Hartman with an all-star band directed by Ernie Wilkins, who also arranged the music. These up-tempo tracks feature solos by McGhee, tenor player Lucky Thompson and trombonist Frank Rehak, and they display Hartman's ability to swing with a big band. Especially notable is his rendition of "Birth Of The Blues. The rest of the tracks, also ballads, are from a session recorded in 1956 for the same album, this time featuring Hartman backed by the Frank Hunter Orchestra with Strings. Hartman's version of "I Concentrate On You is a standout.

But the track that best illustrates what Hartman could do with a song is "I See Your Face Before Me (featured in the soundtrack of Clint Eastwood's movie The Bridges of Madison County). This is one piece that can really touch the listener. Hartman referred to himself as a "singer, period. His rich baritone (the sound somewhat akin to melting hot fudge) and his straightforward approach to a song (paying attention and respect to the melodies and the lyrics) make this a must-hear collection.

What Is There To Say; Ain't Misbehavin'; I Fall In Love Too Easily; We'll Be Together Again; Down In The Depths Of The 90th Floor; They Didn't Believe Me; I'm Glad There Is You; When Your Lover Has Gone; I'll Remember April; I See Your Face Before Me; September Song; Moonlight In Vermont; Blue Skies; Birth Of The Blues; I Get A Kick Out Of You; All Of Me; I Could Make You Care; Tenderly; The Lamp Is Low; While We're Young; I'll Follow You; I Concentrate On You; Stella By Starlight; The End Of A Love Affair; I See Your Face Before Me (Alt. take).