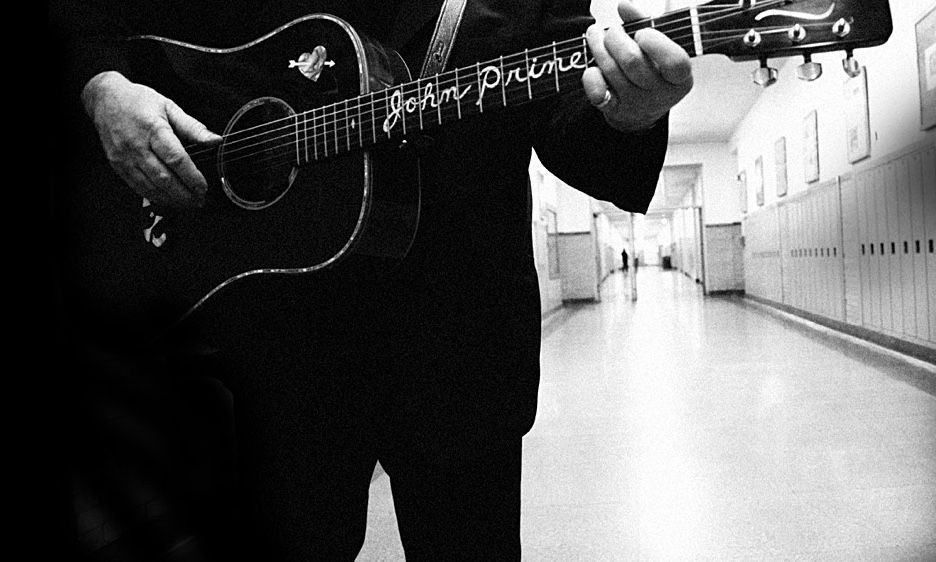 John Prine had the uncanny ability to yell without raising his voice. He could seamlessly express anger with a wry smile and chuckle. The force of his conviction was unmistakable, making an impression akin to a dope-slap the recipient takes a day to realize was delivered. In the song most covered by other artists (the mark of a true songwriter) and the one best illustrating this, Prine relays a tear stain from his childhood, visiting his grandfather in Paradise, Kentucky:

"The coal company came with the world's largest shovel
And they tortured the timber and stripped all the land.
Well, they dug for their coal till the land was forsaken
Then they wrote it all down as the progress of man."

And daddy won't you take me back to Muhlenberg County..."

Bob Dylan considered Prine the greatest living folk singer. That is equivalent to Frank Sinatra stating that Tony Bennett was his favorite singer: no small homage.

John Prine died Tuesday, April 7, 2020, from complications of COVID-19. In recent years, we became aware that Prine was only on loan to us, that we took him for granted until too late, and that the loan was coming due. In 1998, Prine had surgery to remove a tumor in his neck, which, along with subsequent radiation therapy, had damaged his vocal cords. In 2013, he had part of one lung removed to treat lung cancer. While resilient and enduring, we all knew time was short.

On March 19, Prine's wife, Fiona, reported that she had tested positive for the COVID-19 virus and had been quarantined in her home, away from her husband. On March 26 after experiencing symptoms, the singer was hospitalized. On March 28, Prine was intubated and declared in critical condition. By March 30, Fiona reported that she had recovered, and that her husband was in stable condition but not improving. On April 4, Fiona reported that Prine had developed double pneumonia and was requiring increasing ventilator support, while his health further deteriorated.

In 1970 singer/songwriter Kris Kristofferson heard Prine perform at the Earl of Old Town, one of Chicago's many nightclubs. Later that year, in New York City, Kristofferson invited Prine onstage at the Bitter End, and introduced him. In the audience was Atlantic record executive Jerry Wexler, who signed Mr. Prine to a contract with Atlantic Records the next day. Prine released his debut recording John Prine in 1971. The recording contained "Paradise," "Sam Stone," and "Angel From Montgomery," songs that would remain in his book and those of other artists from then on.

Over the next 40 year Prine would release 17 more studio recordings and four live recordings. These albums would give rise to such songs, "Please Don't Bury Me," and "Christmas in Prison" (Sweet Revenge (Atlantic, 1973)); "Come Back to Us Barbara Lewis Hare Krishna Beauregard" (Common Sense (Atlantic, 1975)); "Living in the Future" and "Sleepy-Eyed Boy" (Storm Windows, 1970); "Aimless Love" and "Me, Myself, and I" (Aimless Love (Oh Boy, 1984); "Speed of the Sound of Loneliness" (German Afternoons (Oh Boy, 1986)); "In Spite of Ourselves" (In Spite of Ourselves (Oh Boy, 1999); and culminating on his final recording "Knockin' on Your Screen Door" and "Caravan of Fools" (The Tree of Forgiveness (Oh Boy, 2018)).

If Prine created a single masterpiece, it would be 1978's Bruised Orange (Asylum), produced by his close friend, Steve Goodman ("City of New Orleans"). The recording was a turning point for Prine, after leaving Atlantic Records for Asylum. Goodman proved to be the most empathetic of Prine's producers, coaxing the singer to produce his greatest collection of introspective songs of childhood, a gentle midwestern bildungsroman, yielding "Fish and Whistle," "That's The Way That the World Goes Round," "Crooked Piece of Time," and the masterpiece within the masterpiece, "Bruised Orange (Chain of Sorrow):."

"I been brought down to zero, pulled out and put back there.
I sat on a park bench, kissed the girl with the black hair
And my head shouted down to my heart
'You better look out below!'

Hey, it ain't such a long drop don't stammer don't stutter,
From the diamonds in the sidewalk to the dirt in the gutter
And you carry those bruises to remind you wherever you go."

Bob Dylan, as only Bob Dylan could, described Prine thusly, "Prine's stuff is pure Proustian existentialism. Midwestern mindtrips to the nth degree. And he writes beautiful songs... All that stuff about 'Sam Stone,' the soldier junkie daddy, and 'Donald and Lydia,' where people make love from ten miles away. Nobody but Prine could write like that."

If Dylan was not enough, Johnny Cash, in his autobiography, Cash (Harper Collins, 2003) stated, "I don't listen to music much at the farm, unless I'm going into songwriting mode and looking for inspiration. Then I'll put on something by the writers I've admired and used for years—Rodney Crowell, John Prine, Guy Clark, and the late Steve Goodman are my Big Four ..."

It was on his final recording that Prine began showing himself out with his uniquely organic sense-of-humor on "When I get to Heaven:"

"When I get to heaven, I'm gonna shake God's hand
Thank him for more blessings than one man can stand
Then I'm gonna get a guitar and start a rock-n-roll band
Check into a swell hotel; ain't the afterlife grand?

And then I'm gonna get a cocktail: vodka and ginger ale
Yeah, I'm gonna smoke a cigarette that's nine miles long
I'm gonna kiss that pretty girl on the tilt-a-whirl
'Cause this old man is goin' to town."

May we all be so graceful and gracious and full of life.