By GRAHAM L. FLANAGAN
January 1, 2010
Sign in to view read count
The sight of John Medeski performing on stage—his brow furrowed by intense concentration—can be intimidating. Armed with an arsenal of instruments both traditional and unconventional, he concocts sonic combinations most listeners would never have otherwise conceived. It's obvious that he's there to work—not play. Like a mad scientist who's been stuck in his lab for months, Medeski proudly shows off the results of his experiments, making the listener sit up and take notice...perhaps even notes. The doctor is in session. 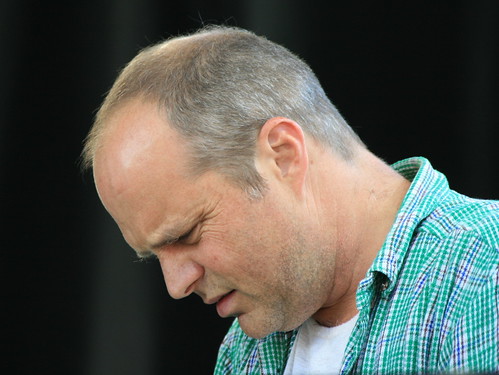 Off stage, however, Medeski's intensity morphs into an unbridled enthusiasm for music. He's happy to be here, making music every day. After nearly 20 years as one of the most popular jazz and avant-garde groups in the world, Medeski Martin and Wood shows no signs of slowing down. According to Medeski, the group's bond continues to strengthen.

"We started off as friends and now we're family," he said. "It's like a marriage with two other guys."

Medeski's 'spouses' are bassist Chris Woods and drummer/percussionist Billy Martin. While every marriage has ups and downs, Medeski said that the group's latest project has created a veritable "up." This month they're touring in support of their mammoth boxed set Radiolarians: The Evolutionary Set. It chronicles a period where the trio intended for the albums to go hand in hand with the live performances they were doing at the time. "It was kind of backwards," Medeski said. "We wrote material, toured on it and then came back and recorded it instead of recording and then going on tour."

In addition to the group's three "Radiolarians" albums released over the last two years, the set features a slew of extra materials, including a live CD, an album of remixes and a handful of bonus tracks. The highlight, however, is Fly in a Bottle: a feature-length documentary directed by Martin, who Medeski affectionately refers to as "Billy Martin Scorsese." The 90-minute film invites the viewer to become a fly on the wall as the group records and tours during the "Radiolarians" period.

"As with everything he does, Billy's got his own style of filmmaking," Medeski said. "It's funny because when I watched it I realized how little we talk about anything when we're working on anything music related."

Along with the feature, the disc also contains a few more Martin-directed curios, including a short entitled CW that's described as Martin's interpretation of Medeski and Chris Wood's relationship, told via a time lapse shot taken on the group's tour bus. Asked if Martin's short film accomplished its stated goal, Medeski said, "Maybe in his own mind! It's totally abstract and hilarious."

Ahead of a Medeski Martin and Wood tour, Medeski will hold down the fort at the not-for-profit venue The Stone in the East Village for a weeklong residency. Medeski constructed the program and selected all of the musicians. Along with two nights of solo performances, he'll join up with a handful of diverse ensembles—one of which is Red Cred: a band Medeski gigs with on the side in Woodstock, NY, where he resides. It will be the band's New York debut. Billy Martin will be on hand for a performance by Hum, a group that also includes guitarist Marc Ribot and drummer Calvin Weston. Medeski seemed most enthusiastic about an evening he has dubbed "Concert of the Secret Guardians," which boasts an ensemble featuring guitarist Tisziji Munoz, who Medeski describes as a "guru and spiritual master" who plays "healing fire-music."

The residency kicks off, however, with a duet performance by the curator and John Zorn, who is also The Stone's Artistic Director, as well as an old friend of the group. Medeski Martin and Wood recently paid tribute to Zorn with their contribution to the Zaebos project, in which a series of ensembles interpret a part of Zorn's Book of Angels series. "We knew Zorn from New York before we 'made it,'" Medeski said. "He's one of the guys. He's a master—a force of nature."

Medeski came to New York after graduating from the New England Conservatory of Music in Boston. Before Boston he emerged from a rather unlikely place: the south. "I grew up in Fort Lauderdale," Medeski said. "But that's not really The South, according to Southerners."

Although the southern jazz scene might not have been as prevalent as those surrounding rock and country-western, Medeski developed a love for jazz at a young age. "The brother of a friend who lived down the street played me some Oscar Peterson," Medeski recalled. "Then I heard some Weather Report and Thelonious Monk. At about 12 or 13 I started taking lessons from this woman Lee Shaw and every week she would give me tons of records."

Shaw introduced the young Medeski to the works of Duke Ellington, Bud Powell, Count Basie and the like; but after the lessons ended, the explorations continued, leading him to artists like Cecil Taylor and the Mahavishnu Orchestra. "I just took it all in," he said. "For me it wasn't about different styles. I just liked cool music. Anything on Blue Note...anything on ECM at that time. I would just go to the record store and buy it."

By the early '90s, Medeski Martin and Wood was firmly established as one of the major proponents of the underground New York jazz scene. However, in the fall of 1995, the group opened for the rock band Phish. In the years that followed, Medeski Martin and Wood became as synonymous with the burgeoning "jamband" scene they were with that of jazz and the avant-garde.

Medeski shuddered somewhat at being grouped in with the jamband movement, but only because he's simply not a fan of the term itself. "It's not as creative a name as jazz or rock 'n' roll or hiphop," Medeski said. "Those are really cool names. 'Jamband' is a pretty weak poetic statement."

Despite his feelings about the word itself, Medeski appreciates the passion for music that many of the jamband fans bring to the table. He traces it back to his college days when a friend dragged him to a Grateful Dead show in Providence, RI. "I'd never been to an event with 20,000 people where there wasn't a fight," Medeski said.

The young jazz, reggae and R'n'B fan without much of a penchant for rock soon realized that something special was happening. "I was like 'Wow!' These people were putting up with this totally free music in the middle of this huge concert. I realized that there must be some portion of this audience that wants something different...who would probably really dig late Coltrane or Albert Ayler if they were exposed to it. They're looking for that cathartic experience that you get from improvised music.

"I think that's why a lot of people go out to see these jambands. That's what a lot of them are looking for. And those are the ones that cross over to see our gigs because that's what we're trying to do. We're just trying to get to a certain place...a certain vibrational state."

Medeski places a great deal of stock in the spiritual side of his music. He regularly practices meditation and yoga. Recently he and his wife journeyed into the jungles of Ecuador where he spent time with members of the indigenous tribe the Secoyas. To reach his destination it took a couple-hours bus ride from the airport, then another hours-long canoe trip. He couldn't bring along his Steinway piano or Hammond B3 organ, but he was able to take some of his more portable devices such as a melodica and a Hawaiian nose flute.

The trip served less as an opportunity for him to make music and more as a chance for the sounds of the jungle to inspire him. "The sounds there are unbelievable. The orchestra of creatures is just incredible. From jaguars to frogs to birds...that inspired me as much as any record."

Medeski's trip to the jungle will likely lend itself to his upcoming tour with Medeski Martin and Wood, as well as to their next journey into the studio, scheduled for next year. When asked if he ever plans on scaling back and playing something along the lines of a more traditional acoustic trio, he says he'd love to if only he could find the time.

"The problem is there's so much happening," he said. "I get asked to do so many amazing things that it's so hard to find the time. I can't turn down a lot of these opportunities that come my way...like to get to play with James Carter or Susana Baca or with the Blind Boys of Alabama or to produce the Campbell Brothers or the Dirty Dozen Brass Band."

Regardless of how busy he is with all of his 'extracurricular' activities, one thing is for sure: Medeski Martin and Wood will be around for a long time to come. "There's no time limit," he said. "We're going to keep doing it as long as it's fun...or until we kill each other."

Medeski Martin and Wood, Notes from the Underground (Accurate, 1991-92)