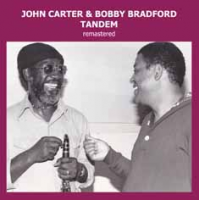 The music on the double CD Tandem (remastered) was all previously available on two single Emanem CDs, Tandem 1 and Tandem 2, released in 1996. They have now been withdrawn and replaced by this release. In the process the music has been programmed in a more sensible order and, as the album title highlights, the sound of the recordings has been improved. Cook and Morton's The Penguin Guide to Jazz Recordings said of Tandem 1 that "the sound on these live recordings is pretty deplorable," which has always seemed rather a harsh judgment given that many listeners have enjoyed it for well over fifteen years without batting an eyelid. Would Cook and Morton have commented on the sound if Martin Davidson had not mentioned it in his own sleeve notes? But, comparing this remastered version to the original releases, it does sound a bit better.

Having said that, there is no need to dwell on the sound; by far the most important thing about these recordings has always been the quality of their music. It originates from two separate duo concerts given by clarinetist John Carter and cornettist Bobby Bradford, the first ten tracks being from Worcester, Massachusetts, in April 1982, and the final six from Los Angeles in October 1979 when Carter and Bradford played as support act to Art Ensemble Of Chicago. Both concerts are here unedited and in the order performed. Four of the six pieces from LA were also performed at Worcester, allowing for appreciation of the differences and subtle variations between the versions. Of the sixteen tracks, seven are solo performances—four by Carter, two by Bradford and one by Bradford solo with accompaniment by Carter. Apart from the three featuring Bradford solo, all other tracks are credited to Carter.

The combination of clarinet and cornet, with no further accompaniment, gives the duos a stark simplicity and beauty, putting the interactions between Carter and Bradford firmly in the spotlight, with no hiding place for either. The pair had played together since forming the New Art Jazz Ensemble in the mid-sixties, first recording together in 1969. So, by the time of these concerts, they had long experience together... and it shows. Their interactions display the effect of those years together, and the resulting knowledge and understanding of each other's instincts; the two give a convincing impression of telepathy at work.

Everything about their playing makes them compatible and complementary—the contrasting sounds of their instruments so that each can be clearly distinguished, their ability to weave around each other to create a totality which is dependent on each of them but is greater than the sum of its parts. Those seven solo tracks serve a dual role, revealing the constituent parts of the duos in isolation from one another, and also acting as cleansing interludes between the richness of the duo pieces.

Carter and Bradford continued working together until the clarinetist's early death in 1991, including recording Carter's epic five-part masterwork Roots and Folklore: Episodes in the Development of American Folk Music (Black Saint & Gramavision, 1982—1989). Wonderful—and ripe for rediscovery—as that is, it is arguable that the two were never better together than on the duo performances here. Simply essential.