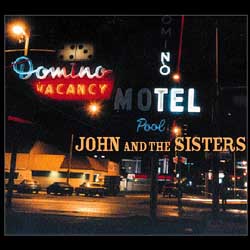 It’s an odd name for an all male blues band: the Sisters Euclid.

With featured guest John Dickie, the band sets out to show you that the name doesn’t have to fit the music. As long as no one else is using its name, the band is free to carve its own niche.

Since 1999, the Sisters Euclid have earned their stripes in the Toronto area, performing at festivals and favorite nightspots. They released two albums in the late ‘90s. John Dickie’s career goes back a lot further. Also from Toronto, he’s thrilled local audiences with rip-roaring vocals and swinging jump blues for over 30 years. His down-home humor and laid back familiarity bring it on.

Together, John Dickie and the Sisters Euclid have created a blues/rock program that draws from their shared backgrounds. Fun oozes all over the place. Even their more serious ballads contain a light-hearted, tongue-in-cheek outlook.

Dickie sings with emotion. His blues passion comes from way back. Breit surrounds him with an arsenal of guitar sounds. From ‘50s surf guitar to roadhouse blues guitar and Chicago lightning guitar, he paints an array of landscapes. Their program offers some of the best in contemporary blues. “Money Changes Everything,” in particular, carries a timeless message along with its searing blues/rock background. Amen. Breit follows that with his trademark slide guitar on “Good Day,” the album’s high point.

Sisters Euclid is a name to remember. Serious blues/rock fans will love it.

About John and the Sisters