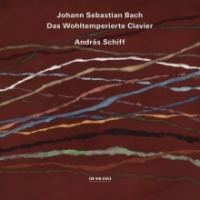 Johann Sebastian Bach's Das Wohltemperierte Clavier (The Well-Tempered Clavier) BWV 846-893, is a collection of two sets of 24-pairs of preludes and fugues composed in every major and minor key between 1722 and 1742, while Bach was in appointment at Kothen and Leipzig, respectively. Ostensibly for teaching and practice, the whole of Das Wohltemperierte Clavier has been a touchstone of harpsichordists and pianist since the advent of recording.

In 1955, Canadian pianist Glenn Gould recorded Bach's Goldberg Variations BWV 988, on piano, thereby beginning a hal century of Bach keyboard compositions performed on the modern piano and captured on tape. For his own contribution, Gould did record both Books of Das Wohltemperierte Clavier in the late-1950s, much in the same mold as his famous Goldbergs. Since that time, Books I and II have been recorded on piano by Sviatoslav Richter, Rosalyn Tureck, Angela Hewitt and Daniel Barenboim. One pianist who has recorded the pieces twice is Andras Schiff, offering Bach from two different vantage points, one recorded in a career on ascent and one recorded at maturity.

Schiff began his Bach survey in 1984 with J.S. Bach: Three Keyboard Concertos for Denon Records. His first two volumes of Das Wohltemperierte Clavier were released in 1986 and '87 by London Records and were generally well received. Over the next 30 years, he made his way through all of Bach's major keyboard works, going on to Mozart's piano concertos, Schubert's piano sonatas and finally, Beethoven's piano sonatas. Then Schiff decided to return to Bach, reprising his 1986 recording of the Goldberg Variations (London) with his 2003 ECM release followed by his updating of the 6 Partitas, BWV 825-830, from his 1993 London set with his 2007 ECM performance.

In both of these previous cases, Schiff has deepened his Bach performances after his tour of the Beethoven sonatas. The same is true for Das Wohltemperierte Clavier. Technically brilliant and densely emotive, Schiff presents a Well-Tempered Clavier for the decade. Schiff's touch in the preludes is light and restrained and his pacing of the fugues is superb and motivated. The pieces orbit together as a brilliant whole definitely describing and aurally illustrating each tonal key in its individual and unique context. This will be the best Bach likely heard until Schiff returns to The Six French Suites for ECM.

The Complete Books I and II Præludium und Fuge.