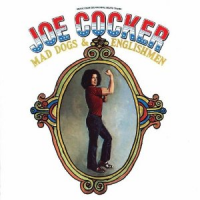 Give me a ticket for an aer-o-plane...I ain't got time to take no fast train...

The first record album (long player of LP, that is—what old people put on turntables and played) I ever bought was Joe Cocker: With A Little Help From My Friends ( A&M, 1969). I purchased this lovely for $2.69 at Osco Drug in the University Mall in Little Rock, Arkansas. It was early 1970. I was 12 years old. I had been hanging out with my cousin that summer. He was five years older than me and had more money and greater access to music. With him I heard Green River (Fantasy, 1969), American Woman (RCA, 1970), Led Zeppelin II (Atlantic, 1969), Sticky Fingers (Rolling Stones, 1971), Stand! (Epic, 1969) , and yes, With a Little Help from My Friends , when they were fresh out of the shrink-wrap. I recall this very fondly and with a lot of excitement. The first live recording I purchased was the two-LP set, Joe Cocker: Mad Dogs and Englishmen (A&M, 1970). I was shocked and stunned by the big sound of that big band, unruly band. I think I know how Cameron Crowe felt first hearing the Allman Brothers Band.

Joe Cocker is the finest white rhythm and blues singer of my lifetime. Widely parodied and generally made fun of because of his spastic stage presence, Cocker introduced legions of white, middle-class teenagers to the music of Ray Charles, Solomon Burke, and Otis Redding. At the same time, he is a supreme interpreter of other composers' songs. Joe Cocker has transformed the music of Randy Newman, Dave Mason, Gary Wright, and those are just the beginning. He went on from this point to make many fine recordings, but I think none with this soul and fire.

On Mad Dogs and Englishmen, Cocker starts off with no less that the Rolling Stones ("Honky Tonk Women"), Leonard Cohen ("Bird on a Wire"), Dave Mason ("Feelin' Alright), and Delaney and Bonnie ("Superstar") and that is just on the first LP of the set. Cocker's boggy Sheffield voice was always well suited for the Muscle Shoals/Atlantic—Memphis/Stax style of soul music and this afterthought of a tour allowed him to put some muscle into it. This is why "Let's go Get Stoned," "Drown in My Own Tears," and "I've Been Loving You Too Long" come off as supremely as they do.

The Mad Dogs and Englishmen tour was a hastily organized appendage to a longer tour Cocker was completing in 1970. April and November of 1969 saw the releases of With A Little Help From My Friends and Joe Cocker! (A&M) respectively and Cocker had spent the time since in a grueling promotional tour with what was touted the "Grease Band." As legend would have it, Cocker arrived in Los Angeles in March of 1970 for some rest and relaxation and planning time to put together a new band. His management had other plans for him. They let him in on a seven-week tour they have arranged for him, to commence in eight days with no band firmly put together. Leon Russell, seeing his old friend between a rock and a hard place, forms the band, becomes the musical director and points this merry group toward the road. After four 10-plus hour rehearsals with his ten-person orchestra, Cocker and Company record the single "The Letter/Space Captain" and hit the road to promote it, starting in Detroit.

The tour was also to be filmed and this present collection of performances was to serve as the soundtrack, recorded four shows into the tour at a packed Fillmore East on March 27and 28. The soundtrack includes songs from his first two recordings: "She Came in Through the Bathroom Window," "Delta Lady," "Bird on a Wire," and "Feelin' Alright." But several stock standards were added. Cocker proved beyond a shadow of a doubt that he can interpret any music—Rock, R&B, Soul, Jazz, Folk—it is all here. There is an infectious air of joy and happiness in this music, substance-fueled and love maintained. This is BIG GOODTIME MUSIC. There are no highlights in this set. THEY ARE ALL HIGHLIGHTS.

This is loosely performed but never sloppy music. Because of the newness of the band and the short, concentrated rehearsal schedules, the Mad Dogs and Englishmen had a certian fresh and spontaneous character. Leon Russell looms as large as Cocker by playing his fat flinty brand of lead guitar and his Oklahoma dust bowl variety of gospel grand piano (the real thing, not one of those synthesized excuses). Bobby Keys (whose later tenor solo on the Rolling Stones' "Brown Sugar" would make him rock deity) and Jim Price sound like a full horn section. Drummers Jim Keltner and Jim Gordon set the standard for other dual trap set bands such as the Allman Brothers Band and the Doobie Brothers. But, for all of the greatness and talent of this band, it is THAT voice that stuns. In his mid-twenties at the time, Cocker had a voice as big, deep, and soulful as Guinness Stout and as sweet as fine Port.

Cocker is at his best on the Parkinson's nod inducing "Feelin' Alright" and "The Letter." These songs have an insistent drive that causes the listener to bob his/her head to the beat, threatening to induce whiplash or a nosebleed. The blues and slower tunes, such as "Let's Go Get Stoned," "Bird on a Wire" and "The Blue Medley" find Cocker at his most agonizingly sincere. "She Came in Through the Bathroom Window" rocks as does "Delta Lady." Where Cocker is the voice, Leon Russell is the vision. His piano style is so unique that like Neil Young's guitar playing or Cocker's voice; the listener could identify it from a mile away. If there is a high point (and I have already said all of the songs are) it would have to be the Cocker/Russell duet on Bob Dylan's "Girl from the North Country." Cocker's mossy brogue meshes provocatively with Russell's Midwestern twang perfectly framing Dylan's love ode. It is a little bit of perfection.

It is fortunate that the Mad Dogs and Englishmen did not survive for other recordings and tours, their music would have suffered from the demand to better what they had collectively done here. This way, one may listen to this music now 40 years later and still hear it fresh as if it had just been extracted from the LP shrink-wrap.

Mad Dogs and Englishmen has enjoyed two major facelifts since it was first released. The advent of the compact disc made it profitable to add more music to an existing release and re-released. What first appeared was Mad Dogs and Englishmen, Deluxe Edition (A&M, 1970/2005) was expanded to 2-CDs with an additional 12 songs to the 14 songs originally released. Notable additions include George Harrison's "Something," The Band's "The Weight" and John Sebastian's "Darlin' Be Home Soon."

Also in 2005, Mad Dogs and Englishmen turned 35 years old and as a birthday celebration, Rhino in cooperation with A&M released the limited edition Joe Cocker Mad Dogs and Englishmen—The Complete Fillmore East Concerts, documenting the entire four shows performed on Friday, March 27 and Saturday, March 28, 1970 at at the Fillmore East. This is as close to perfection as a re-release can get.

Introduction; Honky Tonk Women; Sticks and Stones; Cry Me a River; Bird on the Wire; Superstar; Let's Go Get Stoned; Blue Medley: a. I'll Drown in My Own Tears; b. When Something Is Wrong with My Baby; c. I've Been Loving You Too Long; Girl from the North Country; Give Peace a Chance; She Came in Through the Bathroom Window; Space Captain; The Letter; Delta Lady.