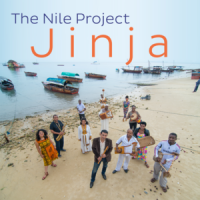 With an approximate length of 4,258 miles, the Nile River meanders through the heart of the African continent and supplies water to a host of countries along its course. The cross-cultural nationalities which are found along its trajectory, is represented in The Nile Project, a unique musicians collective founded in 2013, whose mission is to raise awareness and find solutions to the fact that there are too many people, and not enough water. Jinja (titled after the city in Rwanda, and site of the 2016 reunion) is the recording produced from the annual gathering bringing players and singers from Ethiopia, Egypt, Kenya, Uganda, Rwanda, Sudan and Burundi. The participants each represent their diverse languages, music, rhythms and ethnic instrumentation, united in hopes of cultivating the sustainability of the river they all need to survive.

The celebrations began in the host country of Rwanda, with "Inganji," where native singer Sophie Nzayisenga is joined by Selamnesh Zemene from Ethiopia in a friendly banter, approved by a raucous chorus. "Allah Baqy" is an ancient love song performed in traditional form by Egyptian Dina El Wedidi, with added Sudanese lyrics by Sarah Abunama-Elgadi. The Ethiopian current continues with "Ya Abai Wuha," while "Omwiga," highlights indigenous Ugandan stringed instruments introducing ancestral drumming provided by the other ensemble members. The distinctive African percussion continues on the Burundian "Uruzi Nil," featuring bassist Steven Sogo on vocals as well. The mood is tempered on the recognizable Egyptian "Dil Mahbuby" as Mohamed Abozeky displays his technical prowess on the oud, with an encore by singer El Wedidi.

Since jazz has its origins in Africa, it's no surprise that the saxophone offered by Jorge Mesfin on "Tenseo," has shades of what many of the American players have been trying to achieve with sonic and tonal experimentation. Based on an Egyptian Orthodox hymn, his interplay with Abozeky's oud is masterful and cerebral, as they unite in melodic fusion while improvising along exotic scales. Bassist Sogo returns on "Biwelewele," a tribute to his homeland of Burundi, accompanied by all the singers joining in as a responding choir. The countries of Uganda, Burundi and Rwanda, who all share the Nile River, are highlighted on "Mulungi Munange," in a closing finale to a fascinating record.

While it might seem that there is a lot going on (and there is) the music flows along much like the river which it is emulating. This mighty river is not only a valuable navigation and water source, it serves as a transmission line for the cultures that inter-connect along its expansive historical banks. The Nile Project cleverly blends six languages and dialects with poly-rhythmic tempos and modes, into what they hope will be "the Nile sound." They have succeeded.

About The Nile Project