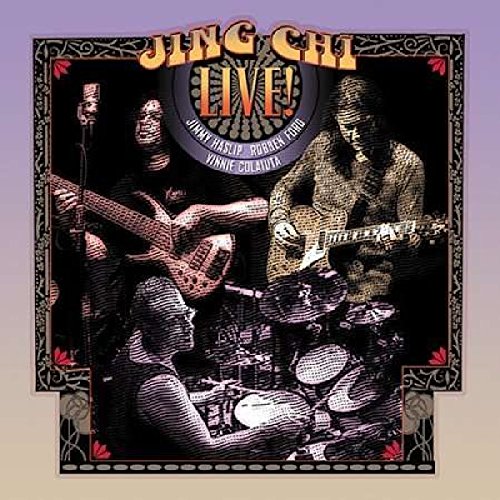 Jing Chi’s 2001 debut was eagerly anticipated by contemporary jazz fans worldwide. For the most part it satisfied, save for feeling a bit too loose around the edges. One whole point of the project was to explore more open-ended improvisation in an electric fusion context, at which the disc succeeded admirably.

Hindsight is always 20/20, however, and over the ensuing months the power trio worked hard at shaping up the floppy ends. On the evidence of these live sessions from Yoshi’s in Oakland, the extra polishing was more than worthwhile. It no doubt helped that Robben Ford and Jimmy Haslip have been collaborating since the earliest days of Yellowjackets, and that Vinnie Colaiuta is one of America’s most flexible, gifted drummers. Such exemplary musicianship can’t help but pay big dividends in the long run.

Four tunes from the debut are revisited on Live! (“Going Nowhere,” “The Hong Kong Incident,” “Crazy House” and “Stan Key”). “Crazy House” would still benefit from some more solid rhythmic foundation — Colaiuta and Haslip both keep it too sparse to support Ford’s liquid blues lines — but it, like the other return visits, shines more brightly than on the studio release. “Hong Kong” has an eerie Frank Zappa vibe at times, perhaps as a nod to Colaiuta’s former boss, but not entirely derivative. If Ford’s vocals on “Going Nowhere” and an excellent version of Bob Dylan’s “Cold Irons Bound” are somewhat light in spirit, still he sells the product convincingly enough.

The instrumental performances are exactly what familiar listeners would expect. Ford’s guitar work is impeccably tasty and tractable, even on the more outward-looking cuts. Haslip, who produced both recordings for the trio, remains their secret weapon: full of presence when it’s needed, otherwise subtle as a warm breeze. Colaiuta once again distinguishes himself as a key figure in contemporary drumming, turning on a dime to accommodate the many shifts in mood and beat. It’s been said time and again that Tone Center might represent the future of fusion, and this release is one more feather in the label’s cap. Phenomenal.

Visit Tone Center on the web.