By Troy Collins
September 10, 2007
Sign in to view read count 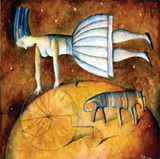 Jim Connolly and The Gove County String Quartet is the debut of the Santa Barbara-based composer's newest ensemble. Leader of the mercurial chamber music septet The Gove County Philharmonic, contrabassist Connolly largely eschews the Philharmonic's eccentricities in favor of a more refined approach.

While the larger Philharmonic tends towards cinematic flourishes and a circus-like atmosphere that invokes Kurt Weill by way of Carl Stalling, Connolly's string quartet reveals an even richer vein of lyricism.

Drawing inspiration from his heritage, Connolly's compositions for string quartet owe a great deal to such American composers as Aaron Copland, Samuel Barber and Charles Ives. A classic songwriter at heart, he focuses squarely on folksy sing-song melodies and rhythmic momentum for the basic foundations of his work.

Connolly regularly uses the wide dynamics, quicksilver tempo-shifts and non-linear development commonly employed by many contemporary composers. But where many of his peers allow dissonance and angularity to dominate, Connolly concentrates instead on harmonic counterpoint and the purity of a strong melody.

Influenced by folk, gospel, country and other strains of Americana, his compositions overflow with pastoral atmosphere and bittersweet nostalgia. No stranger to popular music, he even summons a melodic kernel from the Beatles' "Across The Universe" in "Pinocchio."

A beautiful record, Jim Connolly and The Gove County String Quartet expands beyond the free-wheeling antics explored by his seven-piece Philharmonic, resonating with a sense of timeless maturity.

Even Dust Sparkles on the Moon; Pinocchio; Forgetting the Names of Trees in the Polish Woods; On Rue Clark; Patience Makes the Ocean Blue; Noodling for Flatheads; Hymn for John; Peter and Amy; Crows would steal the Stars if they could fly that high; Time Rides the Ferris Wheel; Once, For the Last Time.