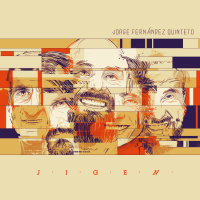 "A través De La Niebla" again takes an adventurous turn with a guitar solo processed by what sounds like a ring modulator: quite a contrast to the acoustic sounds surrounding it. Despite its title "Fragmento II" does not sound especially fragmentary, although it does grow out of a short melodic idea. It includes an overdriven guitar solo (a bit reminiscent of John Scofield) and gives double bassist Arturo Báez Velázquez a chance to shine.

Fernández is a member of the fraternity of drumming bandleaders who make their mark by composing and arranging. He can be heard pushing things along from the drum throne, but he takes no solos. He gives his bandmates plenty of space, and the combination of baritone and tenor saxophones with guitar gives the group a distinctive sound. Fernández's drumming also features prominently as one half of The Piano & Drums Project on Motion (Self Produced, 2016).