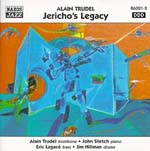 Trombonitis. Alain Trudel and his merry trio add an unusual twist to the jazz quartet: a trombone-led ensemble. This is interesting because recordings where trombonist's are the leader, generally include another brass or reed instrument in the mix. The nimble Alain Trudel coaxes the most difficult brass instrument into its leadership position with grace and panache.

Trudel is a Montreal-born, classically-trained (Conservatoire de Montreal) trombonist who has already made a name for himself by releasing a collection of trombone concertos on Naxos' classical side (8.553831). His vision is of a style-less music, a blurring or elimination of critical differences between the man-made definitions of jazz, classical, and popular music. This is most evident in his originals, particularly the lengthy "Voyage" and the disc's title cut. These are full orchestra explorations in rhythm, time, and invention. On these long originals, the entire ensemble displays a certain coherent chaos that reminds me of Jimmy Giuffre's free jazz trio

The invention does not stop there. Trudel's serious Monk fetish gets a workout with no less than three monk tunes: "Blue Monk", "'Round Midnight", and "Well You Needn't". "Blue Monk" receives a blusy, boozy, fairly straight-forward treatment, while Alain deconstructs the other two. The durable "Well You Needn't" head is carried by Eric Lagace's bass, while the rest of the band distorts the piece Dali style. Trudel closes his recording with a muted "Anthropology" that displays is copious and complete command of his instrument.