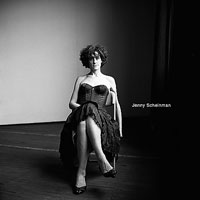 Those only familiar with Jenny Scheinman's two discs for Tzadik—The Rabbi's Lover (2002) and Shalagaster (2004)—may be taken aback by the violinist's leap into singer/songwriter turf on Jenny Scheinman. Others who've followed her work with Americana-centric guitarist Bill Frisell on albums including the sample-rich Unspeakable (Nonesuch, 2004) and the more compositionally focused History Mystery (Nonesuch, 2008) may find her covering material by Lucinda Williams, Tom Waits and Jimmy Reed to be far less of a stretch. And those who picked up on her aptly titled but all-instrumental 12 Songs (Cryptogramophone, 2005) may well find her own compelling songwriting, this time emphasizing her understated singing, making perfect sense.

Released on the same day as Crossing the Field (Koch, 2008)—a more ambitious instrumental project that stretches any preconceptions about the flexible and broad-minded Scheinman even further afield—Jenny Scheinman is more about Scheinman the singer than Scheinman the violinist, although she delivers a solo on her gently interpretive take of Tom Waits' "Newspaper Angels" so spare, warm and rich that it sounds more like a viola. "Angels" is one of five duet tracks with longtime Frisell collaborator Tony Scherr—a singer/songwriter in his own right who, in addition to his more improv-heavy work with the guitarist, has also worked with artists such as Feist, Ani DiFranco and Rickie Lee Jones.

Scherr produced the disc and, in fact, plays on all eleven tracks. These range from an unadorned slide guitar/violin duo reading of the traditional "I Was Young When I Left Home," where Scherr's slide guitar recalls Ry Cooder, to the plaintive "The Green," in which he layers acoustic and electric guitars with acoustic bass, Scheinman's simple, nuanced voice a lovely foil for an equally economical violin solo. Frisell guests on the ambient folk of Rebecca Fanya's softly propulsive "Rebecca's Song," so characteristically concerned with the getting to the essence of the tune as to be nearly unrecognizable.

Scheinman isn't afraid to rock out either, with her Stones-like "Come on Down" driven by drummer Steve Jordan, who also guests on the intensifying folk-rock of "Skinny Man." Drummer Kenny Wollesen, another Frisell alum, guests on three tracks alongside bassist Tim Luntzel, leaving Scherr to deliver some visceral, rough-hewn slide guitar on Lucinda Williams' powerful ballad "King of Hearts." The four-on-the-floor blues of Jimmy Reed's "Shame Shame Shame" is another raucous feature for Scherr—as it is for Scheinman, whose vocal delivery gets to the heart of the matter without ever overstating the case.

While Jenny Scheinman is clearly her disc, defined by her appealing voice and contextually perfect violin, Scherr is an unexpected co-star. Like Scheinman, those who only know Scherr for his work with Frisell won't be prepared for his broader skills as a producer/arranger/performer. Jenny Scheinman is, in fact, a surprise all around, representing a new direction for an artist who, like those with whom she regularly works, sees little point in constraining herself with rigidly defined boundaries.