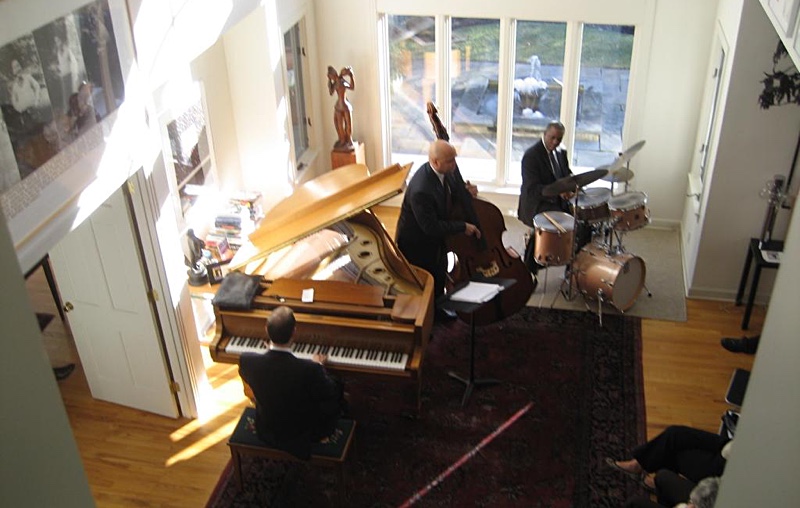 BY MAITLAND JONES, JR.
January 30, 2004
Sign in to view read count
In the late 1950's Mary Wisnovsky was a student at Barnard College and singing at the Vanguard and other clubs in the village on weekends. Maitland Jones was a student at Yale, somewhat further from the action, but spending as much time as possible in New York listening to Monk at the Five Spot and Mingus at the Half Note. We didn't know each other, but time passed, and we wound up as neighbors in Princeton, New Jersey. Our families have now been friends for almost 40 years. The two of us shared both a love of jazz, and a frustration at not being able to hear it live as much as we would like. We also shared a certain dissatisfaction with the available venues in Princeton. There was no club, and it didn't seem to either of us that jazz did particularly well as concert music. At least a certain intimacy was generally missing.

We had been kicking around an idea in our heads for a long time—why not invite musicians to come to Princeton to play in someone's living room? Proximity to New York ensured that travel time for the musicians would not be onerous, and Princeton being Princeton, there were big living rooms with good pianos available. It seemed that there were advantages for everyone. For the musicians, we might be able to provide a decent payday on a "dead" night. For us, the payoff was obvious—we could hear the music we loved in a wonderful setting. And it would be fun to get to know some of the musicians in a way that was difficult to realize in the typical club or concert setting. Costs? Well, that issue was uncertain, but it seemed that an audience of 40-50 should generate enough donation revenue to make break-even possible. At least we didn't seem likely to lose our shirts. Of course, we were reinventing the wheel—in this case the House Concert! Although we had this idea long ago, we never acted on it. Busy lives and shyness were to probably blame. But we finally began to ask musicians if they would be interested. Although we got a variety of answers, no one has ever turned us down.

So, in the summer of 2002 we reached an agreement with Bill Charlap and Sean Smith for a night of duets that September, and Mary prevailed on one of her friends to host the evening. Now we needed an audience—or we really would lose those shirts! In reality it wasn't so hard—we each knew people we thought would be interested, and we also knew people we thought should be interested. We wrote an announcement offering great music, with free snacks and drinks, all for a modest donation. Then we bought some great blue stationary, invented the name "JazzNights," and spent an afternoon on the computer getting a mailing out with details and a description of the artists. In the end, our first audience was about 40 people, Charlap and Smith were predictably wonderful, and we survived, eager to try it again. In truth, we didn't break even that first time. We had non-repeating startup expenses, mostly stocking the bar, but we came reasonably close.

We presented two more JazzNights in December of 2002 and May of 2003, the first with JoAnne Brackeen and Rufus Reid, and the second with Mulgrew Miller and Richie Goods. As we hoped, our audience has grown through suggestions and word of mouth, and is now much larger and more diverse than it was when we started. By spring of 2003, JazzNights 3, we were even forced to turn people away. We are limited by available living rooms to about 50 people and are not sure we want to grow beyond that number anyway, as we fear ambience will be lost. Of course, that size limitation gives us a management problem, albeit a good one: how do we accommodate the growing demand? Over the year we very nearly broke even, and we are confident we will be square by the end of JazzNights 4, this coming September, when Bill Charlap returns, this time with alto/soprano saxophonist Jon Gordon—our first horn.

Where do we go from here? We could continue much as we are doing, presenting duets of various kinds, perhaps expanding to five or six performances a year. There is lots of room for artistic innovation, even within the limited duet format. Unusual instrumental couplings can be imagined and we would love to work in some people new on the scene. But it would surely be nice to be able to expand to larger musical groups. To do that we need a venue able to accommodate more musicians and the larger audience necessary to break even. We have some possibilities in mind that we will have to try out. The risk is that we will lose the intimacy we currently have—we'll see.

The "take home lesson" is, we think, that one should not yield to doubts and uncertainty—give it a try! We'd be happy to answer questions, and you can reach us by email at [email protected] or [email protected]. To see what we are currently doing take a look at our website. This site posts information about future evenings as soon as we have it, and contains writeups and playlists for the first three JazzNights. And come to one of our concerts—just send us an email first!