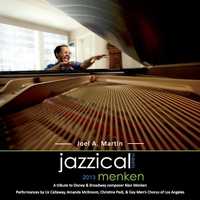 On any given Sunday especially if the weather is good, if one travels to Long Island's North Shore "Gold Coast" you will occasionally see beautiful, hand-detailed Rolls-Royces, Ferraris, Bentleys or other luxury-end autos tooling about. In more than one conceptual way, Jazzical Menken is tantamount to experiencing this metallic magnificence. The primary difference, thankfully, is that one can enjoy this marvelous recording 24/7/365 and it never needs brakes or— horrors!—a tune up.

Virtuoso pianist and composer/arranger Joel A. Martin, under his Jazzical® brand banner has gathered an energized group of world-class musicians—players and vocalists—put them with his neatly arranged charts and celebrates very well-known works of Oscar®, Grammy®, you-name-it-award-winning composer, Alan Menken.

Deploying a stellar "show band," as well as the actual vocalists who sang these hits for the Disney movies or on Broadway— and a full men's chorus to boot—Martin and Company chauffeur the listener on an enjoyable 60-minute Disney ride that is entertainment of the highest order. Throw in two Menken world premieres and it's a bravura performance all-around.

Martin is a keyboard whiz who demonstrates chops aplenty ("A Whole New World") and a gift for soulful swinging. His accompaniment behind the All-Star batting order of vocalists is superb ("Cold Enough to Snow," "So Close"). As arranger, he is shrewd to realize that while he's working with golden-spun material, there's still room to place his own mark—"Beauty and the Beast" in a vampish "Killer Joe" groove, for example.

Jazzical Menken is a terrific musical tribute to Menken and his Mouse House canon. It's as enjoyable as a Sunday ride with Tinkerbell as "The Spirit of Ecstasy" on the hood catching the colors of the wind.

Seize the Day; Part of Your World; A Place Called Home; Beauty and the Beast; Cold Enough to Snow; Jazz Lullaby; Under the Sea; Colors of the Wind; A Whole New World; So Close; That's How You Know; Anytime You Need a Friend; Somewhere That's Green; God Bless Us, Everyone.

About Joel A. Martin