By GREG SIMMONS
December 30, 2011
Sign in to view read count 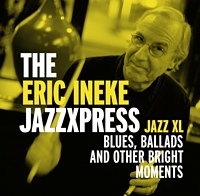 Straight-ahead and alternatively swinging and blue, The Eric Ineke Jazzxpress' Jazz XL delivers a terrific performance through first-rate material treated with energetic, loving respect. Some of jazz's great composers are represented, with performances of material by Xavier Cugat, Johnny Griffin, and the ubiquitous Thelonious Monk, showing admiration for the tunes, overlain with top-notch individual performances. Culled from three live performances in Holland, recorded in 2008 and 2009, the set supports the notion that good things continue to happen across the pond.

Without reading the credits, it might be easy to assume that "A Monk's Dream" was written by Thelonious Monk (not to be confused with the pianist's actual composition, "Monk's Dream"). That it was actually written by Johnny Griffin reveals the depth of the tenor saxophonist's appreciation for Monk's unique musical language, despite their too-brief time playing together. Here, Ineke goes so far as to include the two quick drum strikes immediately preceding the opening melodic statement; a nod to the signature of a performance now over fifty years old. Taking the first workout, tenor saxophonist Sjoerd Dijkhuizen}} likewise exhibits an innate grasp of the off-center melody with a wonderfully dissonant line.

Trumpeter Ruud Breuls opens and largely sustains a simple duet arrangement of "You Don't Know What Love Is" with pianist Rob Van Bavel. Bruels' treatment of the melody—as well as his solo—is warm and tender, befitting such a romantic ballad. Bavel also has a good emotional grasp of the tune, even as he builds his improvisation with more aggressive cadenzas and an overall faster hand.

"The JAMF's Are Coming" is a big, full-band blues workout reminiscent of those great Pablo All Stars recordings of the 1970s. It swings hard and, at eleven minutes long, has plenty of room for extended turns from everyone. It's just a good old- fashioned jam.

The lone original on the record, bassist Marius Beets' "Jotosco" is another jam, but with a harder bop sensibility and more of an "Ali vs. Frazier" trading of improvisations between Dijkhuizen and trumpeter Rik Mol, both acquit themselves well. Ineke, taking a rare solo turn, shows himself to possess a great grasp of the details. He pounds pretty hard, but also subtly pulls his rhythms, adding an additional layer of sophistication.

Jazz XL may not be possess startlingly creative originals, or even particularly forward-looking interpretations, but it's not supposed to be. A fine album of mostly standards, performed by an excellent band with clear understanding of the music, in the end, it delivers something simply compelling: a great record to hear.

Nightingale; A Monk's Dream; You Don't Know What Love Is; The JAMF's Are Coming; 'Round Midnight; A Portrait of Jenny; Jotosco.