By Mark Sullivan
December 20, 2017
Sign in to view read count 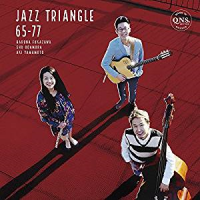 Jazz Triangle 65-77 is a New York-based chamber jazz trio made up of flutist Haruna Fukazawa, acoustic guitarist Shu Odamura and bassist Aki Yamamoto. They are all Japanese and have musical backgrounds in both jazz and classical music: there is a definite classical tinge to their composing and arranging. Bassist Yamamoto is responsible for the majority of the compositions and arrangements, and the set opens with his "Arbitration," a sprightly Latin tune that serves as an inviting introduction to the group. "Waiting For Spring" is a waltz with a reflective, rubato introduction. "Firebird" closes out the opening group of Yamamoto compositions. It is a beautiful ballad, with fine arco bass playing in the introduction, as well as an exceptionally melodic bass solo.

Flutist Fukazawa contributed "A Queen Of The Night," another ballad. The first cover is pianist Bill Evans' "Interplay." It has a classical feel with its contrapuntal head, but features a jazz guitar solo from Odamura (perhaps a tribute to Jim Hall, guitarist on the original recording). Odamura's sole composition "Parallel Worlds" has an opening theme built on a bass ostinato, followed by an intricate second theme shared by flute and guitar. After a series of solos there is a reprise of the first theme, giving the piece a satisfying balance.

The set closes with two covers. Russian composer Sergei Rachmaninoff's famous "Vocalise" gives the vocal line to the flute in Yamamoto's arrangement. It is a composition that lends itself to diverse interpretations, and finds a home with this jazz trio, while also giving a bit of focus to their roots in classical music. Odamura and Yamamoto share the arrangement of the standard "Stranger In Paradise," which is given an energetic jazz treatment, with the bass playing the theme (and overdubbed flutes adding to the bridge). An unusual choice, but typical of this triangle: a group that gains strength from the contributions of all three members